Solo Singers Get Ready for 2010 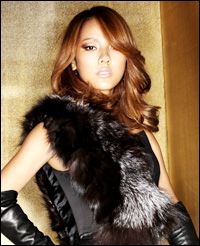 Boy and girl bands may have conquered music charts last year, but solo singers are aiming at comebacks in 2010. But will they be able to win over fans amid the popularity of idol groups?

Lee Hyori and Kim Jong-kook, the two stars of the first season of the popular show "Family Outing" are returning to the small screen as singers this February. Netizens expressed their anticipation as the news spread that they were returning to the idol group dominated music scene, and experts are expecting a year of more diversity.

Lee, a former member of girl group fin.K.L in the late '90s, has become an icon among fellow singers and fans alike. Thanks to her likable personality, charismatic stage presence and fashion, she has not only topped music charts, but was also chosen as the most stylish singer in the nation at various events. The 30-year-old's popular songs and wardrobe have influenced many, and fans and music experts are waiting in anticipation for future hits and styles.

Expectations are high, but some doubt that the diva can add anything new to the already edgy outfits and fashion trends of today, which have been displayed by younger and more hip idol groups during her hiatus.

But the singer of 12 years seems to know what she is doing.

According to her agency, Mnet Media, the singer has once again been working on lyrics for her new album, as she believes it is the only way to distinguish herself from younger artists.

"She sees that coming up with lyrics that can touch the listener is most important", the agency said through a statement.

Lee wrote a number of songs on her last albums, including "Don't Cry" and "Closer".
Her fourth album will be released early next month.

Kim Jong-kook, on the other hand, is returning with an array of ballads. The 32-year-old will release his sixth album, his first in more than a year.

The former member of popular duo Turbo has garnered fans with his sweet, emotional voice and tender ballads. The talented singer has also appeared in numerous television shows, the most recent being "Family Outing"

While his songs have touched the hearts of female fans in the past, it'll be interesting to see if the singer ― who played a rather comical character on television ― can deliver romantic tracks once again.

Female singer Son Dam-bi is releasing a new mini-album in late February. The 26-year-old captivated fans with her disco number "Saturday Night" and "Crazy", but failed to leave any indelible marks, donning sexy, shiny outfits and funky makeup that are all too common today.

The young singer may have surprised fans with her catchy songs and powerful dance moves over the past year, but she will need to step up her game to compete with fellow solo artists and idol groups.

Fellow singer Seo In-young is also planning to return to the stage as a solo singer. The 25-year-old had been a member of pop group Jewelry for the past nine years, but she dropped out of the group along with Park Jung-ah.

Featured in a couple of reality shows, including "Seo In-young's KAIST" on music channel Mnet, the tough singer is famous for her edgy looks and straightforward personality.

Seo has already surprised fans with her vocals on her solo albums and also an original soundtrack number for popular drama "IRIS" (KBS, 2009).

Se7en, who has spent three years in the U.S. trying to tap into the American music industry, will also return to the local stage with a new album. The tall, talented singer gained fans with his hit number "Passion", but then moved his attention overseas, releasing an album in China and moving to the U.S. Although he released a digital single called "Girls" featuring famous American rapper Lil' Kim and has also been working with Amerie, the singer failed to make a lasting impression in the U.S., and returned to Korea. He is currently working on his new album which will be released this spring.

The 25-year-old has not made it in the U.S. yet, which is why it is crucial for him to regain his strength and confidence as soon as possible. Local fans, including his celebrity girlfriend, Park Han-byul, will be cheering him on.

"Solo Singers Get Ready for 2010"
by HanCinema is licensed under a Creative Commons Attribution-Share Alike 3.0 Unported License.
Based on a work from this source