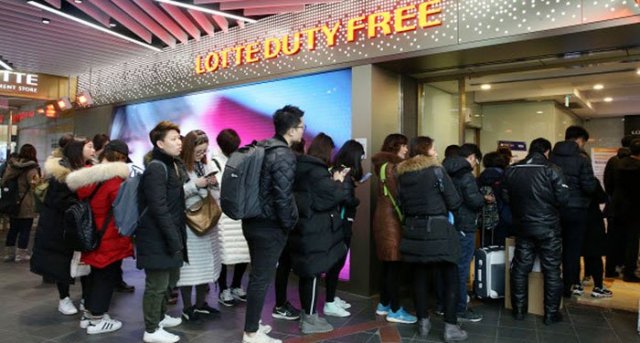 Chinese tourists wait outside a duty-free shop in Seoul in March last year.

The Chinese government in March imposed an unofficial boycott on Korean goods and services, including so-called "zero-dollar" tours that were a significant cash cow for low-end tourist businesses here.

Their resumption offers hope that the matter can be resolved as the two countries work towards easing tensions sparked by the deployment of a Terminal High-Altitude Area Defense battery from the U.S. in southwestern Korea.

But big travel agencies in Beijing and Shanghai still offer no package tours to Korea.

The agency is selling the package tour on its website, but it is difficult to search for the agency on the web, so they only appeal to customers in the know.

One industry source said, "We have been seeing some travel agencies in small towns starting to resume tour packages to Korea in July, but there are no signs that the big agencies are changing, so we can't jump to conclusions yet and the Chinese government may well slam on the brakes again".

"Some Chinese Travel Agencies Resume Package Tours to Korea"
by HanCinema is licensed under a Creative Commons Attribution-Share Alike 3.0 Unported License.
Based on a work from this source