Son Hyun-joo VS Cho Jung-seok VS Lee Kwang-soo: Who is going to be the last one to laugh? 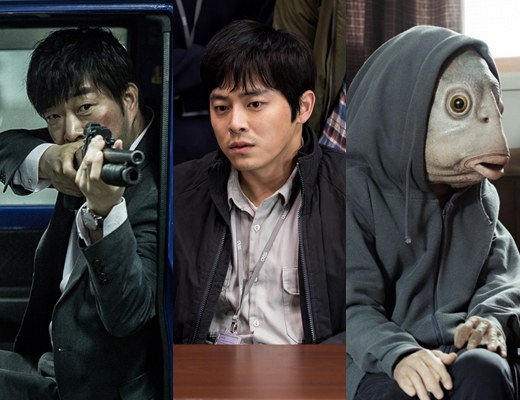 "The Martian" holds of record of 3 million audiences in just 11 days and next is "The Intern" at the Box Office.

On the 22nd, Korean movies are about to take over; Son Hyun-joo's "The Phone", Cho Jung-seok's "The Exclusive : Beat the Devil's Tattoo" and Lee Kwang-soo's "COLLECTIVE INVENTION".

Son Hyun-joo is attempting at his third thriller. He plays Ko Dong-ho, a man who struggles to live ever since his wife was killed a year ago.

He said it himself, that he prefers intense action to sweet romance. He is going to draw all eyes on him in "The Phone". He stands against Bae Sung-woo this time and relies on his cell phone to talk to the wife that was killed 1 year ago.

The story of a man who tries to change the past by talking on the phone with a wife that was killed a year ago seems absurd. However, Son Hyun-joo's devoted performance is bound to make anyone become immersed in the movie.

However, Cho Jung-seok's worries prove he's just overreacting. Heo Moo-hyeok is a passionate reporter who is looking for a scoop. However, a report he makes goes out with the wrong information and the story begins there. From the happiness of having attained an exclusive, to the frustration of finding out it was wrong, Cho Jung-seok displays a diverse series of characters.

The unique thing about this movie is that the genre is 'undecided'. Without having to say what genre it is, Cho Jung-seok said, the movie is like a' fusion pasta'.

"COLLECTIVE INVENTION" was proven its worth at the Toronto International Film Festival before its actual release. After the first still was revealed, fans worried about the whereabouts of Lee Kwang-soo when he was actually the one with the fish mask on.

Lee Kwang-soo plays Park Goo, an experimental character who turns into a fish-man. He is unbelievably nice and unsociable. He had to put up with 8 kg of the fish head costume throughout the whole making.

Lee Kwang-soo's face hardly appears in the movie. However, he managed to pull off the character of Park Goo through shaking his shoulders and hands, voice and more. He had to work with a machine that a staff controlled throughout the shoot, so there was a lot of effort there.

"Son Hyun-joo VS Cho Jung-seok VS Lee Kwang-soo: Who is going to be the last one to laugh?"
by HanCinema is licensed under a Creative Commons Attribution-Share Alike 3.0 Unported License.
Based on a work from this source