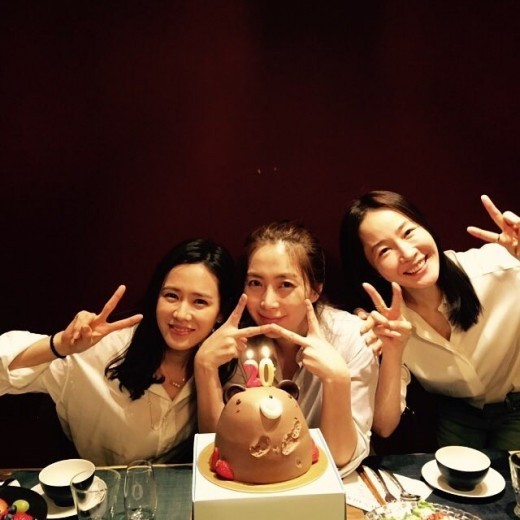 Actress Song Yoon-ah was congratulated by her best friends, Son Ye-jin and Uhm Ji-won on her 20th anniversary of her debut.

On March 31st, Song Yoon-ah posted a photo on her Instagram and said, "My pretty girls touched by heart. You came over with the dainty flower pot and pretty cake to celebrate the late 20th anniversary again" and "I'm so thankful I'm your big sister. I love you".

In the shared photo, the bright smiles and the heartwarming vibe by the three actresses, Song Yoon-ah, Son Ye-jin, and Uhm Ji-won catch your eyes.

Song Yoon-ah debuted after she won Gold Prize in KBS Super Talent competition in 1995. She starred in MBC's 'Mama - Nothing to Fear' last year.

"Son Ye-jin and Uhm Ji-won celebrate Song Yoon-ah's 20th anniversary"
by HanCinema is licensed under a Creative Commons Attribution-Share Alike 3.0 Unported License.
Based on a work from this source