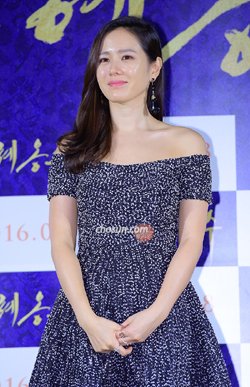 Son Ye-jin made an appearance at a press preview of her latest film "The Last Princess" late last month.

Directed by Heo Jin-ho, the movie is an adaptation of the bestselling novel of the same title by Kwon Bi-young.

The actress told reporters she felt a sense of responsibility as it was her first time playing a historical figure.

Son plays Princess Deokhye (1912-1989), the last princess of the Korean Empire who was exiled to Japan as a kind of hostage to the empire-builders.

"The difficult part was figuring out how to properly mix what I knew from documentaries and the historical record with what I felt she would have done", Son said.

Heo is best known for directing such romantic melodramas as "Christmas in August" and "One Spring Fine Day".

Switching to a historical epic was certainly a stretch.

"I needed an actress who can portray the princess from youth to old age, and I believed in Son's craft", He said.

Son's co-star is Park Hae-il, who plays an independence fighter on a mission to bring the princess back to Korea.

"The stories of people during the period when they had to risk their lives to cry out for Korea's independence broke my heart", he said.

The film is scheduled for release in August.

"Son Ye-jin on Starring in Big Historical Epic"
by HanCinema is licensed under a Creative Commons Attribution-Share Alike 3.0 Unported License.
Based on a work from this source