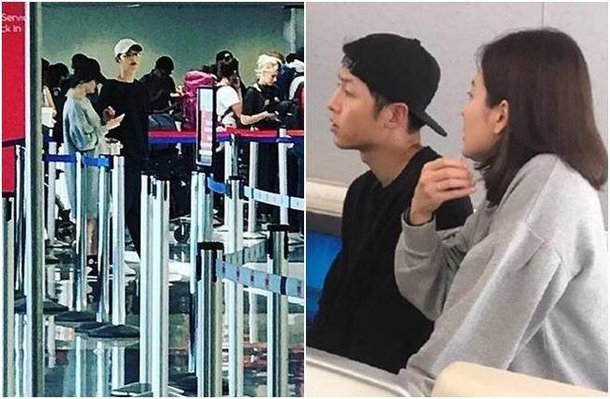 Song Joong-ki and Song Hye-kyo were seen together at the LA airport Chinese media reported on the 5th and SNS blew up.

According to reports, fans took these pictures of Song Joong-ki in a black cap and Song Hye-kyo in a white sweater. They look like they're talking to someone outside of the camera. Evidently, they left for LA together on private business.

Fans spotted them at LA airport soon after and pictures started posting. Fans said, "We wanted to see them up close, but the crowd was so huge we had to stay away" and "They were wearing matching hats in black and white and Song Hye-kyo looked too skinny from far away".

Meanwhile, the two are getting married on the 31st of October.

"Song Hye-kyo and Song Joong-ki spotted at LA airport "
by HanCinema is licensed under a Creative Commons Attribution-Share Alike 3.0 Unported License.
Based on a work from this source