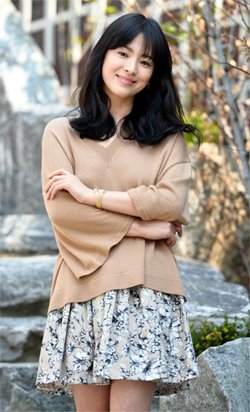 "It was hard", actress Song Hye-kyo said of the finale for SBS TV drama "That Winter, the Wind Blows", in which she stars as a blind heiress of a large company. "Other actors were able to look at the ground and each other, but for my character, my eyes had to stay blank. Now it's weird for me to look straight into other people's eyes".

"That Winter, the Wind Blows" topped ratings from the second episode with an average of 14 percent viewership among dramas in the same time slot, according to AGB Nielsen Media Research.

Fans were attracted by Noh Hee-kyeong's strong script and high-level cinematography made possible because eight episodes were already taped before the show first aired.

The success of the drama did not come without controversies, however. "Many asked why a blind people would wear high heels and makeup, even eyeliner", Song said. "But when I visited facilities for the blind and asked them, they told me that they also wear makeup and colorful clothing".

The actress was proud of her work's impact. "I read viewers' comments about the drama saying that they have come to have interest in the blind and that watching the drama has made them angry to see people look down on the disabled", she said.

"That Winter, the Wind Blows" was Song's first TV drama in five years since "Worlds Within" with KBS in 2008.

Song said she was dazed at such positive feedback on her acting skills, which she worked hard to improve. "I studied the script thoroughly with writer Noh and invested much time for the show, so I think I was able to depict my character's emotions with more depth", said Song.

When asked about her future plans, Song said she wants to work on some eccentric projects or in a new genre that she has never experienced before like thrillers.

"Song Hye-kyo Basks in Latest Drama's Success"
by HanCinema is licensed under a Creative Commons Attribution-Share Alike 3.0 Unported License.
Based on a work from this source