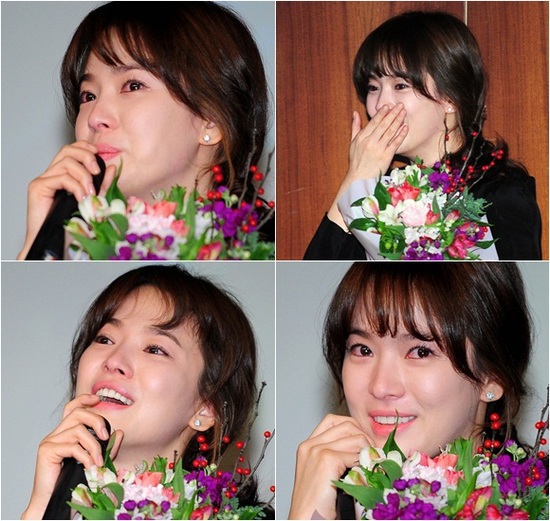 Actress Song Hye-kyo was moved to tears at her first movie award.

She was awarded 'This Year's Female Movie' at the "2011 Female Movie Awards", hosted by a group of female movie lovers which was held on December 15th in Seoul.

Song Hye-kyo made her debut a long time ago but this is her first movie award. She was grateful and said, "I wish director Lee Jeong-hyang was here, who helped me make this good movie and characte,r but it's too bad".

Song Hye-kyo also said while crying, "I am so nervous at this moment receiving this award but I can't even imagine what it would be like at the Cheongryong Movie Awards".

She concluded "It would have been nice if "Today" did better, and I'm sad it didn't. I thank everyone around me and I will work harder to show you more in the future".

Song Hye-kyo delivered a deep and serious performance in the movie "Today" by director Lee Jeong-hyang, which is about a documentary producer who forgives a 17 year-old girl who kills her fiancé in a hit and run accident, but wonders if the forgiveness is truly genuine.

"Song Hye-kyo cries at her first movie award"
by HanCinema is licensed under a Creative Commons Attribution-Share Alike 3.0 Unported License.
Based on a work from this source