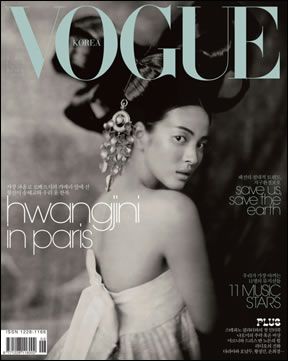 The star of the movie "Hwang Jin Yi" Song Hye-kyo, was selected as the cover model of fashion magazine Vogue Korea, the first Korean actress to achieve the distinction.

Song is in a Korean traditional outfit designed by Jung Ku-ho, who was in charge of the wardrobe for the movie "Hwang Jin Yi". The shoot was in Paris with the Italian photographer Paolo Roversi. Leading hair stylist Julien d'Ys and makeup artist Stephane Marais did Song's hair and makeup. A Vogue Korea staffer who helped prepare the shoot for over six months said, "The work was done by a dream team that has great influence on fashion in the world, and not even Vogue France would have been able to gather them. It has great significance that the dream team gathered for the Korean actress Song Hye-kyo, and the photos show her in hanbok".

During a concept meeting, Song was asked about "Hwang Jin Yi" and told Roversi and other staff about the famous gisaeng or female entertainer the movie focuses on. They had understood the gisaeng to be similar to Japanese geisha. After the shoot, Roversi said Hwangjini must have been "a woman like Camille Claudel or Virginia Woolf". Responding to praise in the French press, Song said, "It may be because a Korean actress wore Korean traditional outfits instead of a dress. That's why I felt more responsible and was nervous during the whole shoot".

The pictures can be seen on 18 pages of Vogue Korea published on Sunday. A video diary of the shoot will be broadcast on the Olive Channel. Meanwhile, "Hwang Jin Yi" goes on release on June 6.