Song Hye-kyo, Jun Ji-hyun, Lee Young-ae and Jeon Do-yeon, The Queens Are Back 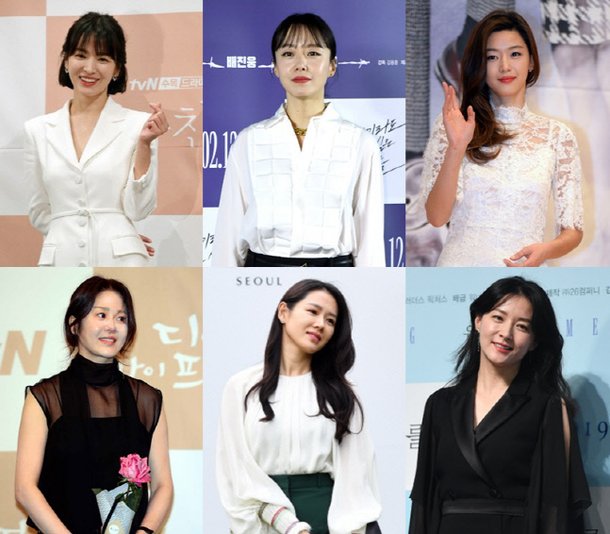 Glamorous stars trickle down to the small screen.

Top stars, including Song Hye-kyo, Jun Ji-hyun, Lee Young-ae, Jeon Do-yeon, Go Hyun-jung and Son Ye-jin, will visit viewers with dramas in the second half of this year. Viewers' expectations are also growing for the lead lineup, who are rarely seen in dramas.

Jeon Do-yeon and Jun Ji-hyun, who have been using the screen as their main stage, will return to dramas after five years. They will star in JTBC's "Lost" and tvN's "Jirisan" which are scheduled to air in September and October, respectively. Jeon Do-yeon joins hands with director Heo Jin-ho in "Lost". In this work, which depicts the story of ordinary people who suddenly realize that they are 'nothing' in the midst of life's downhill, Jeon Do-yeon plays the role of ghostwriter Boo-jeong who wants to be a writer, and works with Ryu Jun-yeol. Jun Ji-hyun will work with writer Kim Eun-hee-I again in "Jirisan" following the Netflix drama "Kingdom: Ashin of the North" which was released last month. "Jirisan" is a mystery that tells the story of people climbing the mountain against the backdrop of the vast Jiri Mountain starring Ju Ji-hoon.

Song Hye-kyo and Lee Young-ae are expected to return to the small screen at a similar time and face off with ratings. 'Mellow Queen' Song Hye-kyo will star in SBS' new Wednesday-Thursday drama "Now, We Are Breaking Up". It is drawing attention as it is her first drama in two years. Song Hye-kyo is Ha Yeong-eun, the head of the fashion company's design team, who is a cold-hearted realist, and tells various stories about love from romance to separation with the male lead Yoon Jae-gook (Jang Ki-yong). There is also Lee Young-ae, who is set to return after four years since SBS' "Saimdang: Light's Diary". Lee Young-ae is planning a different transformation through JTBC's "Inspector Koo". "Inspector Koo" is about a police-turned-insurance investigator named Goo Kyeong-ii tracking down a series of murders while the truth behind is discovered as a genius who feels joy only in solving unsolved crimes.

Go Hyun-jung and Son Ye-jin will return with attractive female characters. Go Hyun-jung will announce her comeback with JTBC's "Reflection of You". It is the first time in two years since KBS2's "Neighborhood Lawyer Jo Deul-ho 2: Crime and Punishment". "Reflection of You" is a revenge play between a woman who is faithful to her desires and another woman who has lost the light of her life. Go Hyun-jung is expected to play the role of Hee-joo, portraying a solid inner and colorful texture with her unique solid acting. Son Ye-jin leads JTBC's "Thirty, Nine". In a real-life human romance drama about the friendship, love and life of three friends turning forty just around the corner, Son Ye-jin plays Cha Mi-jo, the head of a Gangnam dermatologist who grew up in a rich environment. Jeon Mi-do of tvN's "Hospital Playlist" will also join the show.

Moon So-ri and Kim Hee-ae are expected to portray 'wo-mance' in the drama "Queen Maker". "Queen Maker", which features two women who live completely different lives holding hands to create a righteous world, is already expected to meet Kim Hee-ae and veteran actress Moon So-ri, who will come back four years after JTBC's "The World of the Married".

In the first half of this year, drama expectations continued to struggle with single-digit ratings. With the exception of SBS' "The Penthouse 3" and tvN's "Hospital Playlist Season 2", there are many dramas that recorded 0% viewership. Amid intensifying competition with the ever-increasing online video service (OTT) platform, some observers say that the upcoming appearance of top actors is an opportunity to reverse the situation.

"It is unusual to meet veteran actresses with 20 years of experience in dramas at the same time", a broadcaster said. "As it is organized at a similar time, it is expected that there will be a confrontation of ratings with pride on the line".