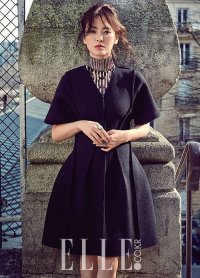 The popular Korean actress Song Hye-kyo is to make her U.S. debut with a leading role in independent film "Fetish". The movie, which will be shot in New York, is a thriller about a woman with psychic abilities. Song will star opposite Austrian actor Arno Frisch who featured in "Funny Games".

The movie's casting director Susan Shopmaker, who has cast roles in some 50 major Hollywood films such as "Hedwig and the Angry Inch", met Song for the first time at the Pusan International Film Festival in October. Shopmaker was reportedly convinced of Song's potential on the global stage, citing Song's beauty, mix of Eastern and Western charms and her acting in "Hwang Jin Yi", which was in the official selection at the PIFF.

Song's agency said, "She has been getting offers from Hollywood, but none were as apt to show the true Song Hye-kyo. She also decided to appear in the movie since it is an independent film that fully reflects the director's intentions. We are sure that this film will allow Song to spread her wings".

The film is to be directed by Korean filmmaker Son Soo-peom. The New York University graduate is a laureate of the 2002 Student Academy Awards and was invited to the Cannes Film Festival that same year. With this movie, Son will present a story about oriental sorcery staged in New York. It will be released next year. Song left for New York on Wednesday for a month-long shoot.