Song Hye-kyo to Appear on Cover of Vogue Korea 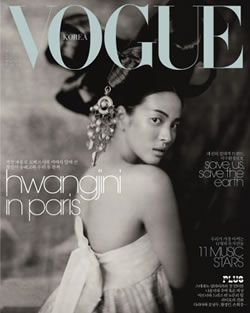 Actress Song Hye-kyo will become the first Korean actress to appear on the cover of the fashion magazine Vogue Korea, to take place in the June edition.

So far, the magazine has published only the photos of world-renowned celebrities and models on its cover.

Song, whose new movie "Hwang Jin Yi" will open June 6, is shown in an alluring pose in the cover photo, wearing a traditional Korean wig with one of her shoulders revealed.

The June issue of Vogue Korea, including an 18-page photo spread of Song, will be published May 20 under the title "Hwangjini in Paris".

"Song Hye-kyo to Appear on Cover of Vogue Korea"
by HanCinema is licensed under a Creative Commons Attribution-Share Alike 3.0 Unported License.
Based on a work from this source