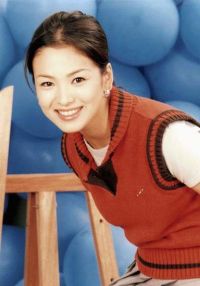 Taking journalists by surprise at a press conference on May 20 at the 61st Cannes Film Festival, director John Woo and popular Korean actress Song Hye-kyo appeared together to announce that she would star as the heroine in his next big budget production, '1949'.

With them were the film's producer, Terence Chang, and SONG's co-star, Taiwanese actor Chang Chen. Chang, who will play SONG's lover in the film, starred last year in maverick director Kim Ki-duk's Cannes entry "Breath" and has a lead role in Woo's soon to be released 2-part epic Red Cliff.

Actress SONG is adored both locally and across Asia for her endearing TV roles in dramas such as "Full House" (2004) and "Autumn in my Heart" (2000). Along with numerous commercials, the actress has made several features, including 2007's period drama "Hwang Jin Yi" which drew director Woo's attention to her. She also starred in "My Girl and I" (2005) and has just completed her US debut in the upcoming indie-feature "Fetish".

1949 is set during the Chinese Civil War, after the end of World War 2, and is based on actual events leading up to the founding of the Republic of China in 1949. SONG plays a woman who loses her husband in the war and moves to Taiwan where she becomes involved with another man (Chang). The romantic epic was written by Wang Hui-Ling, who penned the celebrated films Lust, Caution (2007) and Crouching Tiger, Hidden Dragon (2000).

With an estimated budget of US$40 million, the Chinese-language epic will be produced by Terence Chang's Lion's Rock and Woo, with shooting to begin in December 2008. Fortissimo Films is handling worldwide rights outside China, with the theatrical release aiming for December 2009 and the 60th anniversary of the founding of the People's Republic of China.

"SONG Hye-kyo to Star in John Woo's 1949"
by HanCinema is licensed under a Creative Commons Attribution-Share Alike 3.0 Unported License.
Based on a work from this source