Song Joong-ki, a soldier again? 'What' is more important 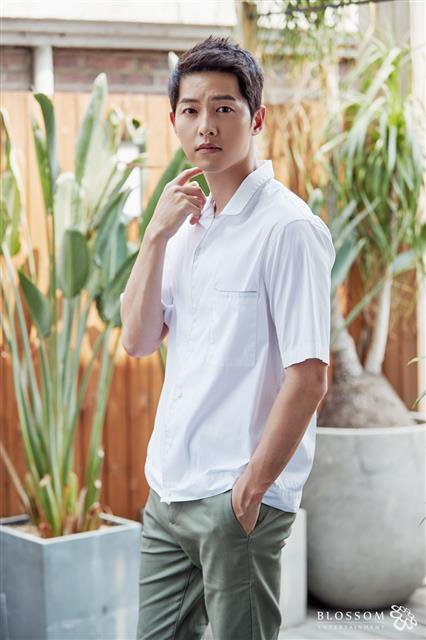 Song Joong-ki said he got the script when he was resting not long after "Descendants of the Sun". It was another soldier role but he didn't mind. He would just have to act as differently as possible.

Hwang Jung-min, So Ji-sub, Lee Jung-hyun and Lee Kyung-young are his co-stars. "What matters is not the size of my role but what movie it is. My favorite actor is Edward Norton. He is a top star but in "Birdman" he plays a smaller role. That takes confidence and it seems beautiful to me". This kind of thought came from the time he was in the 2011 drama "Deep-rooted Tree" where he made a short appearance as the young King Sejong. "I had no reason not to be in that drama. I liked the role very much".

As a Hallyu star, isn't it difficult for him to be in a movie that deals with the sensitive matters of history? "It's not like the movie is based on lies. I became a Hallyu star by being in Korean dramas so I want to be confident in what I do".

What did bride-to-be Song Hye-kyo say about this? "She's not the kind to come to my VIP Premiere so I didn't invite her. She's just looking forward to the release date". He claims his father is so happy one of Asia's most beautiful women is going to be a part of his family. Song Hye-kyo is also known as an actress with a conscience and that's why Song Joong-ki loves her.

"There's a lot to learn from her, from her behavior to her thoughts. I guessed that's the reason she managed to stay a Hallyu star for such a long time without any problems". Song Joong-ki claims he will be busy with "The Battleship Island" and marriage for the time being.

"Song Joong-ki, a soldier again? 'What' is more important "
by HanCinema is licensed under a Creative Commons Attribution-Share Alike 3.0 Unported License.
Based on a work from this source