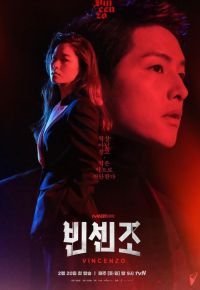 tvN's new Saturday-Saturday drama "Vincenzo" which will premiere on the 20th, unveiled two-person posters of Vincenzo who predicts the birth of a dark hero like never seen before and Hong Cha-yeong.

In the poster released on the same day, Vincenzo and Hong Cha-yeong steal attention with their aura.

"Vincenzo", one of the most anticipated works in the first half of 2021, is a story about an Italian mafia lawyer who came to Korea due to the betrayal of the organization, wiping out the villain in a villain's way with a veteran self-taught lawyer.

Jeon Yeo-bin said, "Song Joong-ki, I was able to trust and act at once. "As time goes by, we will show the chemistry between Vincenzo and Hong Cha-yeong", she added, adding expectations.

On the other hand, if you are curious about the perfect chemistry between "Vincenzo" and Hong Cha-yeong, you can check it out on tvN at 9PM on Saturday night on the 20th.

"Song Joong-ki and Jeon Yeo-bin in "Vincenzo""
by HanCinema is licensed under a Creative Commons Attribution-Share Alike 3.0 Unported License.
Based on a work from this source