Song Joong-ki and Kim Tae-hee, number one stars to be hugged by 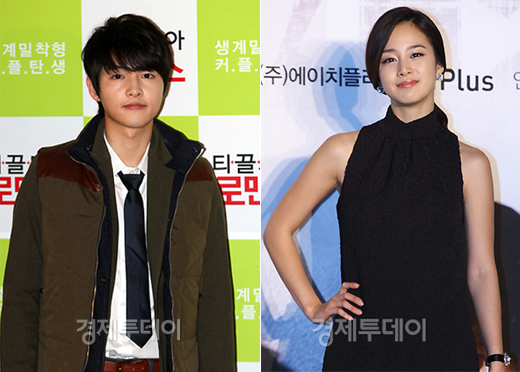 Actor Song Joong-ki and actress Kim Tae-hee were chosen as the number one stars to be hugged by.

Albamon, an employment site, conducted a survey of 763 university students titled, "The Star You Would Most Want To Be Hugged By". The result was 11.3% choosing Song Joong-ki and 19.7% for Kim Tae-hee.

Song Joong-ki has been acknowledged for his talents in the drama "Sungkyunkwan Scandal" as well as "Deep-rooted Tree" and the movie "Penny Pinchers".

Kim Tae-hee is well known for her performances in the dramas "IRIS" and "My Princess", and she has currently extended her work to Japan, where she is starring in the drama "99 Days With the Star".

"Song Joong-ki and Kim Tae-hee, number one stars to be hugged by"
by HanCinema is licensed under a Creative Commons Attribution-Share Alike 3.0 Unported License.
Based on a work from this source