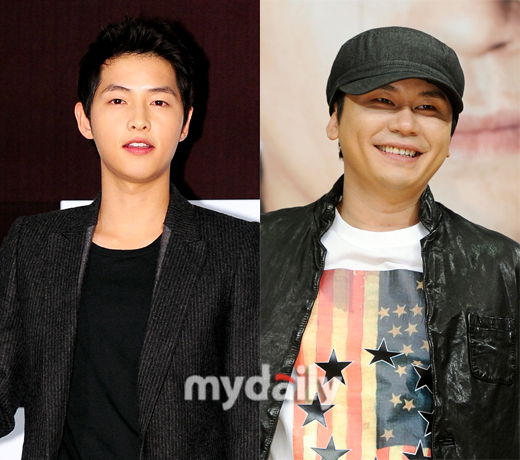 Actor Song Joong-ki and YG Entertainment have been chosen to shine in 2013.

Song and YG were the winners of a survey titled "2013 Korea's First Brand Winners" carried out in D-Cube Art Center in Seoul on the 29th.

"2013 Korea's First Brand Winners" is a survey held every year at a place where the country's consumers are gathered and choose for themselves. About 700 consumers took part in this survey.

Those who chose Song was because of his good looks and also talent. They hope he will represent the country next year. Song Joong-ki has recently starred in the KBS 2TV drama "Nice Guy" and was in the movie "A Werewolf Boy" which is currently in theaters.

YG was also chosen as the brand to shine in the year 2013. The value of the brand has been increased greatly thanks to Psy's "Gangnam Stlye" which ranked 2nd place in the Billboards which is a first for an Asian and broke through 700 billion hits on You Tube. Top artists like Big Bang and 2NE1 are also expected to make great com backs next year.

As if to prove this, director of YG Yang Hyeon-seok ranked first place in possession of celebrity stocks.

Song Joong-ki and YG will be awarded a special prize at the Hyatt Grand Ballroom on the 22nd of January.

Meanwhile, other than Song Joong-ki and YG, Kakao Talk and Uniqlo Heat Tech have also been chosen as special award winners.

"Song Joong-ki and YG, brands to shine 2013"
by HanCinema is licensed under a Creative Commons Attribution-Share Alike 3.0 Unported License.
Based on a work from this source