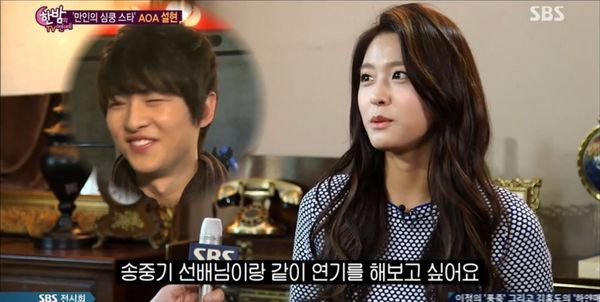 While the poster for Song Hye-kyo and Song Joong-ki's drama "Descendants of the Sun" is out, Seolhyun had mentioned in the past that Song Joong-ki was her ideal type.

Seolhyun said on the SBS TV show "TV News At Night" that Song Joong-ki had been her ideal type of guy for a long time and that she wants to act with him if she had the chance.

Meanwhile, "Descendants of the Sun" released a poster of Song Hye-kyo and Song Joong-ki.

"Descendants of the Sun" is the story of soldiers and doctors on foreign land and building relationships there.

"Descendants of the Sun" is aiming for pre-production and high quality under the direction of Lee Eung-bok and Baek Sang-hoon and the cast includes Song Hye-kyo, Song Joong-ki, Jin Goo, Kim Ji-won, Onew, Kang Shin-il, Lee Seung-joon, Jo Jae-yun, Seo Jung-yeon, Hyun Jyu-ni and more. The first episode can be seen on the 24th of February at 10PM.

"Song Joong-ki is Seolhyun's ideal type"
by HanCinema is licensed under a Creative Commons Attribution-Share Alike 3.0 Unported License.
Based on a work from this source