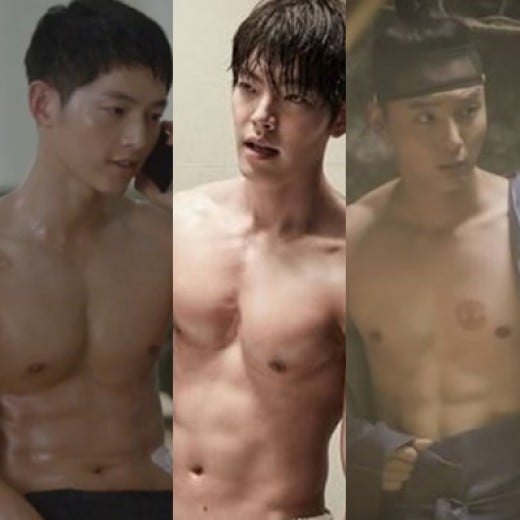 As summer has arrived, we've put together the names of the three stars, who showed their toned abs in their dramas: Song Joong-ki, Kim Woo-bin, Yoon Si-yoon.

Just like the title of his previous drama, "Nice Guy", Song Joong-ki shows off a pure-hearted and nice guy appearance. The prettyboy returned as a manly man when he was dismissed after serving the mandatory military service. When playing his famous role Captain Yoo Si-jin, his lady fans had to suffer from 'Yoo Ji-jin Syndrome'. His six pack revealed during the drama was good enough to steal lady drama fans' hearts.

◆ Kim Woo-bin, 'you can take off your shirt any time, but please don't'

Kim Woo-bin's physique is as hot as his face. You can take a look at all of it in KBS 2TV's "Uncontrollably Fond". Since he debuted, his lady fans fell in love with him for his contrasting appeals, seemingly blatant yet soft-hearted inside. With his new role, Sin Joon-yeong in the currently running "Uncontrollably Fond", it is clear that drama fans will swoon over him again. Especially, as the episode on July 14 has revealed Kim Woo-bin's six pack, it may be one of the most memorable drama scenes so far.

He grew up so fast! After he was dismissed from the military after serving the Marine Corps, Yoon Si-yoon is such a masculine man now. As he joined KBS 2TV's 'One Night Two Days' as a new member, he also revealed his unexpected side being a pure-hearted man. He then took a challenge in his career to transform his acting style by taking a role in JTBC's "Mirror of the Witch". Especially when he took off his top in the drama, he showed off his hot appeal by revealing his toned ab. Contrasted to his docile look on the face, Yoon Si-yoon boasts his firm toned ab. Drama fans are falling for his unexpected appeal again.

"Song Joong-ki, Kim Woo-bin and Yoon Si-yoon, three actors who showed off the best ab in dramas"
by HanCinema is licensed under a Creative Commons Attribution-Share Alike 3.0 Unported License.
Based on a work from this source