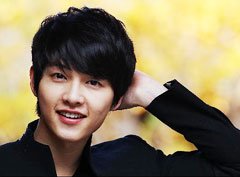 Fans of Song Joong-ki are forking over some 8,000 yuan or about W1.44 million to ticket touts for a front-row seat in a show featuring the Korean soap star, Chinese media reported (US$1=W1,171).

Song is to appear in the Hunan TV show "Happy Camp" next week.

The prices reflect the explosive popularity of the actor and the soap "Descendants of the Sun" in which he stars. It was streamed in China simultaneously with the terrestrial airing in Korea.