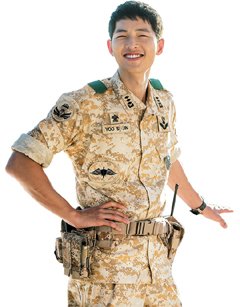 The popularity of KBS' new series "Descendants of the Sun" keeps growing in Korea and beyond, not least thanks to the male lead played by Song Joong-ki.

Viewer ratings have been nearly 30 percent here, and in China episodes have been watched 2.5 billion times on a streaming site.

Co-star Song Hye-kyo paid tribute to Song Joong-ki at a media event Wednesday. "I can't imagine who else could play this role so well", she said.

But Song Joong-ki said he does not feel too much heat. "I don't feel the effect of popularity because I'm watching the episodes as an ordinary viewer", he said. Breaking with usual practice, the whole series was shot before the first episode aired, so the actors never knew that they had a hit on their hands.

What makes his part so special? Most male leads in Korean soaps are either rich or, if they are poor, display a rather run-of-the-mill boyish charm. But Song plays a mature professional soldier.

"Soldiers are attractive to viewers in a world of natural disasters and terrorism", says psychologist Kim Byung-hoo. "A lot of middle-aged women have seen their men get older and lose their sparkle, so they like to fantasize about a strong capable man coming to the rescue".

Among women in their 40s, a whopping one-third are watching the series. 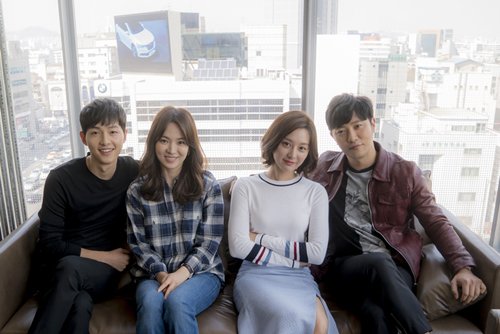 The cast of KBS' series "Descendants of the Sun" pose for a photo ahead of a media event in Seoul on Wednesday. From left, Song Joong-ki, Song Hye-kyo, Kim Ji-won and Jin Goo. /Yonhap

But Song Joong-ki would be a draw whatever part he plays.

"Women in Korea, China and Japan prefer men who have both masculinity and femininity rather than patriarchal men who have money, status, and power", says psychologist Choi Sung-ae. "Song Joong-ki epitomizes this ideal".

Unlike most young actors who had years of training in talent factories before they debut, Song had a life before showbusiness and only became an actor while he was a student in business administration at Sungkyunkwan University in Seoul.

He was popular for his feminine, pretty looks in the early stage of his career -- "Sungkyunkwan Scandal" in 2010 and "A Werewolf Boy" in 2012. But when he got discharged from military service last year, he came back more masculine.

"I don't think you can really plan to have a certain image as an actor at certain time, like companies set quarterly targets", he said.

"Song Joong-ki Works His Magic in Hit TV Soap"
by HanCinema is licensed under a Creative Commons Attribution-Share Alike 3.0 Unported License.
Based on a work from this source