Song Kang-ho and Lee Na-young: 'We Have Nickname of 'Tom and Jerry" 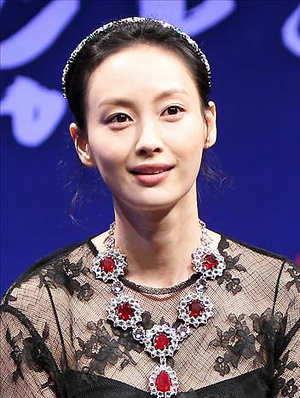 Actress Lee Na-young expressed her feelings about acting together with Song Kang-ho at the production presentation of the movie "Howling" -- held at a movie theater in Seoul on January 10 -- by saying, "We had come to have the nickname of 'Tom and Jerry' on the film set due to our appearance wrangling with each other as a senior and junior detectives in the movie". Song Kang-ho produced laughter by responding, saying, "She looks like Jerry, doesn't she?" Lee Na-young will play a new detective named Eun Young who will investigate the murder case, and Song Kang-ho will play a senior detective named Sang Gil who will solve the case with Eun Young as a team in the movie.

The director Yoo Ha produced this movie after a four-year break since he made the movie "A Frozen Flower" in 2008, and the movie is based on the original Japanese novel "Kogoeru Kahi". Lee Na-young revealed that Song Kang-ho helped her greatly while filming and she said with overwhelmed emotion, "I was touched by his kindness which seemed genuine, and every time whenever he showed his kindness to me, I really appreciated it and I even thought that I would not finish filming this movie without him. I could learn and realize many things while working with him. He helped me greatly whenever I felt difficulties". Song Kang-ho said, "I would like to explain this movie as a movie that makes a huge wave under a calm and deep lake, and Lee Na-young also looks like a calm 'morning dew' rather than an active and impressive actress. Lee seems to be a very suitable actress for "Howling" in that point.

Yoo Ha said, "This movie is a story about minorities who are neglected from the city. I wrote the script for this movie while thinking about those neglected minority groups". Song said, "I had always wanted to work with Yoo Ha before, but he seemed to like to work with a handsome actor by seeing those actors whom he worked with". You Ha answered, "Song Kang-ho is also one of those handsome actors, and I always call him 'Song Bin' after the name of the representative handsome actor Won Bin".

"Howling" will be released on February 9.

"Song Kang-ho and Lee Na-young: 'We Have Nickname of 'Tom and Jerry""
by HanCinema is licensed under a Creative Commons Attribution-Share Alike 3.0 Unported License.
Based on a work from this source