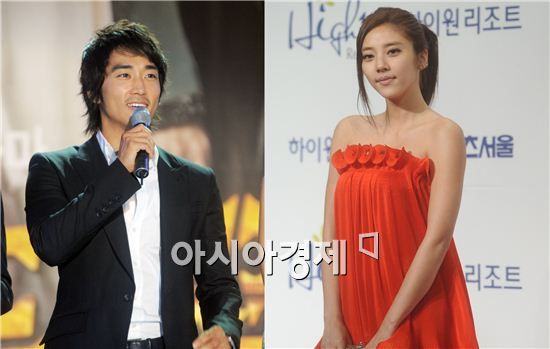 Korean heartthrob Song Seung-heon has said he does not mind being involved in a scandal with popular songstress Son Dam-bi but that a report alleging that the two are an item are "unfortunately not true".

The 33-year-old actor made the remark Tuesday during a press conference for his upcoming movie "A Better Tomorrow", responding to the news published in local daily Seoul Shinmun yesterday.

The paper had quoted multiple witnesses who had spotted Song and Son often hanging out together with friends and then the two riding together, separately from their friends, when going home.

"My first response was 'wow' when I first heard it from my manager who called me to ask me about it...... She's considered the sexiest singer in Korea so I actually didn't mind it", Song said. "However, I'm sorry to disappoint you but unfortunately, it's not true".

The actor, who has been filming "A Better Tomorrow" on overseas locations till recently, then added, "It's only been a week since I've returned to Korea so I thought about how the scandal came about when I realized that I had run into her at a Japanese restaurant not long ago but I don't think she saw me".

Representatives for both stars had dismissed the report yesterday, saying that the two are not even friends.

An official at Song's agency Storm S Company explained that Song is "not even acquainted with Son on a personal level and have never met privately one-on-one" while Pledis said Son is "extremely busy these days with her shooting schedule for music and variety shows".

Song is also set to make a comeback to the small screen later this year through TV series "My Princess" opposite top Korean actress Kim Tae-hee.

Son, 26, debuted through single "Cry Eye" in 2007 and has released two mini-albums and a full-length album to date. She is best known for her 2008 hit "Crazy" and has also tried her hand at acting through SBS TV series "Dream - Drama" with Kim Beom.

She is currently promoting her third mini-album "queen" which was released in early July.

"Song Seung-heon denies dating Son Dam-bi"
by HanCinema is licensed under a Creative Commons Attribution-Share Alike 3.0 Unported License.
Based on a work from this source