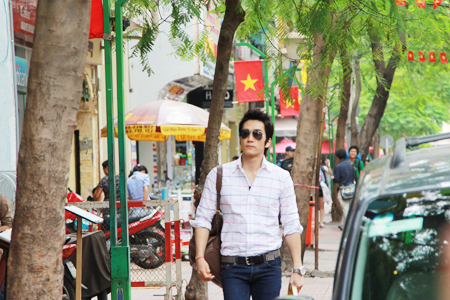 Song Seung-heon walks down a street during a visit to Vietnam to shoot a television program this January.(Courtesy of Korea Foundation)

Heartthrob Song Seung-heon is coming back to his fans through the small screen.

Despite 16 years passing since his debut, Song, 35, remains as handsome and single as ever, coupled now with better acting ability. As one of the pioneers of "hallyu", or the Korean wave, his popularity continues to the rise, both in Korea and overseas. 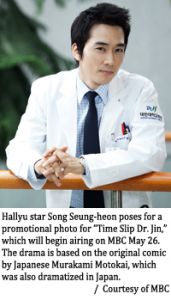 Returning from a year hiatus, Song is ready to rock the small screen again by appearing in the MBC drama "Time Slip Dr. JIN", which will begin airing on May 26. Based on the original comic by Japanese Murakami Motokai, it has been previously dramatized in Japan.

The actor plays Jin Hyeok, a smart and cold-hearted surgeon who takes a journey back through time to the late 19th century Joseon Kingdom (1392-1910). This time warp will be portrayed in his costumes that will change from a modern doctor's white gown to wearing "hanbok", or Korean traditional costume. His passion for medicine will remain the same throughout time.

Song is excited about playing a new doctor character and appearing in an epic drama for the first time.

"I saw the Japanese version of 'Dr. JIN' and am glad to be offered the role when it came to Korea", Song said in an e-mail interview with The Korea Times. "I loved the fresh theme of a time slip, in which a present day doctor medically takes care of people in the past".

In the new drama, Song's character gradually changes to become a more humane doctor as he must rely on only basic medical instruments and his knowledge to treat the diseases that ran rampant during the Joseon era.

To play the role of a talented surgeon with cool-headedness, Song was busy memorizing long difficult lines. "Medical terms are unfamiliar to me and it is challenging to learn the lines", he added.

The actor was also positive about the expansion of hallyu. He is no stranger to the popularity of Korean pop culture. He stood at its forefront where he made a name for himself with his drama "Autumn in my Heart" when it swept through Asia. In 2009, he and three other actors ― Jang, Lee Byung-hun and Won Bin ― sold out the some 60,000 tickets at an event titled "Four of a Kind" that was held in Tokyo Dome, Tokyo.

"Hallyu began with the popularity of Korean dramas or movies in Asian countries, but now it has widened boundaries to include K-pop, which spread throughout Europe and the United States", he said. "Ifeel really good about it, and in a way, proud that the interest is spreading to Korean language, Korean food and the culture in general".

Though he does not have many chances to meet K-pop singers, he sometimes works with them in dramas and they become friends. "I listened to B2ST's 'Fiction' a lot when Ki-kwang starred in "My Princess" with me. I now work with Kim Jae-joong of JYJ in 'Dr. JIN' and my favorite JYJ song is 'In Heaven'", Song said.

Song receives lots of letters and gifts from his fans abroad.

There is one that he distinguishes and particularly remembers. "The fan said she was moved by my drama and became interested in Korea and Korean culture and learned Korean. She told me that many people are impressed by my acting and take interest in Korea, so I should be proud of what I am doing", the actor said. "More overseas fans greet me in Korean and write to me in Korean. I feel more responsibility in my work".

Technological advances have brought Song closer to overseas fans. He actively uses social networking services (SNS) such as Facebook (www.facebook.com/OfficialSSH), Me2Day (www.me2day.net/storms09) and Sina Weibo (www.weibo.com/officialssh) and communicating with fans through SNS is a new hobby for him. His facebook site hit 57,621 likes as ofTuesday morning, and Me2 Day saw 159,371 friends.

"Development of communication technologies has made the world smaller. It would be best if I could visit all the countries to meet my fans in person, but that's realistically impossible", he said. "I share my daily life with my fans through SNS and see how they feel through replies. It is really fun".

Song has been in a few international movie productions including "So Close" (2002) where he starred with Hong Kong actresses Karen Mok and Shu Qi. In 2010, he worked with Japanese actress Matsushima Nanko in "Ghost: In Your Arms Again".

"I am always open to opportunities. I usually show enthusiasm in learning foreign languages when I visit foreign countries, but it is not easy as I thought. I always wish I could do better and be ready for any chances that might come by", he said.

Song is not a prolific actor. He only does one or two dramas or films a year, carefully thinking about how to shape his image.

He picked Hae-young in "My Princess" as a turning point in his acting career. "Previously, I took on characters living a life full of ups and downs. For me, Hae-young was the first character that was so rich, bright and cheerful in the drama. I felt much lighter while acting the character", he said.

During his free time, he watches movies a lot at home and loves to play golf. The actor, who is also known for having "vampire looks" (for not aging), said that he neither drinks nor smokes in order to maintain a healthy body and stay in the best possible condition.

Aside from acting, Song has had an amibition of running a hotel named after him. In one of the first steps toward that dream, he has opened up a branch of a franchise restaurant "Blacksmith" inSinsa-dong, southern Seoul named "Blacksmith".

A glance at Song Seung-heon 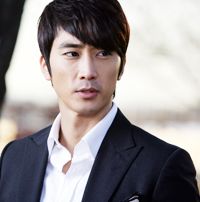 Korean actor Song Seung-heon, born in 1976 in Seoul and the youngest out of the three, is one of the representative hallyu stars, well known for his roles in popular Korean television dramas such as "Autumn in my Heart" (2000) and "East of Eden" (2008).

The 35-year-old actor first started his career in 1995 as a model for fashion brand "Storm" and stepped into the world of acting in 1996. He became first known to viewers through staring in sitcom "The Three Guys and Three Girls" (1996).

Song has appeared in several films, situation comedies and TV dramas since 1996 and shot to stardom in one of the beloved TV dramas "Autumn in my Heart", which was exported to countries in Asia and gained tremendous popularity among them.

Song has won many outstanding awards - two at the "KBS Drama Awards", three at the "MBC Drama Awards" including "Grand Prize", and "Talent Division" at "17th Korean Culture Entertainment Awards".

The award-winning actor exposed his musical talent by releasing an album in 2004 with the title track "I Love You". In 2009, Song set up his own talent agency in Seoul, "StormS", which manages a number of the already-famous stars such as Kim Jung-eun, Kim Min-jung and Jo Hyun-jae.

He was appointed as a goodwill ambassador by the Korea Foundation in November 2011. Earlier in the year, Song visited Vietnam, sharing his time and works with various agencies in the Southeast Asian nation.

During his one-year stint as ambassador for the foundation, which falls under the Ministry of Foreign Affairs and Trade, the actor has and will take part in disseminating Korean contemporary culture overseas. 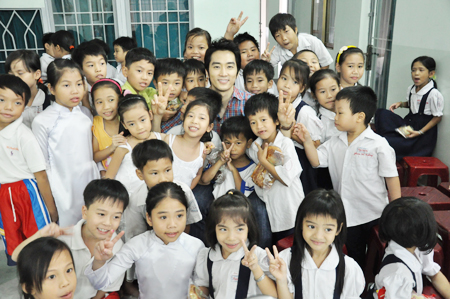 Song Seung-heon poses for the camera with children at an orphanage in Vietnam in January.
/ Courtesy of Korea Foundation

"Song Seung-heon returns to small screen"
by HanCinema is licensed under a Creative Commons Attribution-Share Alike 3.0 Unported License.
Based on a work from this source