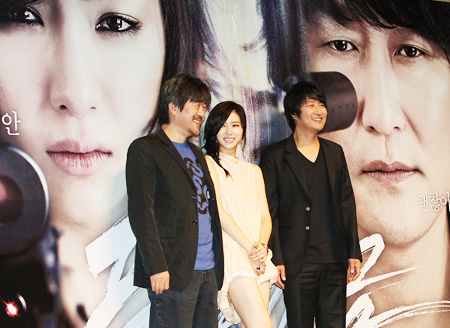 In the upcoming film "Hindsight", actor Song Kang-ho hopes to tell an uncanny story through his collaboration with actress Shin Se-kyung.

"(Sin and I) are an odd pairing, but I am glad the film seems to have captured an uncanny energy from this odd coupling and I hope audiences will be able to feel it, too", Song told reporters during a promotional event for the film in Seoul, Wednesday.

The 44-year-old seasoned actor and the 21-year-old sitcom starlet appear as no ordinary couple in the film.

Song plays former gangster Du-heon, who retires from the underworld in order to pursue his dreams as a chef. Sin, best known as the devoted older sister in the hit TV series "High Kick Through The Roof", casts off her sweet image in her role as a national shooting athlete-turned-assassin. She is commissioned to kill Du-heon but things get complicated when the two develop an intimate relationship.

"It's a relationship that's hard to nail down - it's neither romantic nor marked by the sort of affection you'd feel for a little sister. There's enough room for the audience to make their own decision", said the Song.

For director Lee Hyun-seung, who has helmed melodramas such as "Il Mare", "Hindsight" marks his fourth drama about male-female relationships.

"I have done four films that feature male-female duos. But none of them have been about conventional romantic relationships. Men and women form all sorts of connections. ... It might seem vague but this allows room for imagination and provokes curiosity", Lee said.

The director, promoting his first feature work in 10 years, said fans can look forward to seeing Song as never before.

"If there had been a Song Kang-ho as directed by Park Chan-wook and a Song Kang-ho as depicted by Bong Joon-ho, then there had to be a Song Kang-ho in Lee Hyun-seung's style", he said of the actor, who has appeared in such weighty films as Bong's "The Host", which remains the highest-grossing homespun film to date. He also starred in Park's Cannes-winning vampire film, "Thirst". Song's best trait is that he is unafraid of new challenges, Lee said.

When asked which actor might be suitable to play Song's part should "Hindsight" be remade in Hollywood like "Il Mare" (Keanu Reeves and Sandra Bullock star in the parts originally played by Lee Jung-jae and Jun Ji-hyun, aka Gianna Jun, respectively), he said there is no one. "Even in Hollywood, Song has to play it. There is no actor in the world that can deliver subtle nuances like he can".

He added that even sequences cut during the editing process captured such diverse faces of the actor that he wished he could have used them all.

Song, on the other hand, said he had much to learn from his younger co-star.

"I had a difficult time catching up with Sin's beauty, youth and passion", he said. "It was an extremely enjoyable filmmaking process that allowed me to learn a lot from observing both the inner and outer beauty of this actress".

He added that he looked forward to watching the young woman's growth as an actress.

"She may be young but she has a lot of potential. She performed very well in this film, but I look forward to the colorful acting she will have to offer in the days to come".

Sin said it was an honor to act opposite Song.

"He is not an actor who wants to bask in the spotlight by himself - he wanted us to propel (the narrative) together and I was greatly moved by that", she said.

Meanwhile Sin had to learn how to ride a motorcycle and shoot guns for the part, and said it was a meaningful experience.

In addition to Song and Sin, the film features a stellar cast of supporting actors, including Youn Yuh-jung and Oh Dal-soo. The film, distributed by CJ E&M Pictures, is slated to open in early September.

"Song, Sin star in uncanny drama"
by HanCinema is licensed under a Creative Commons Attribution-Share Alike 3.0 Unported License.
Based on a work from this source