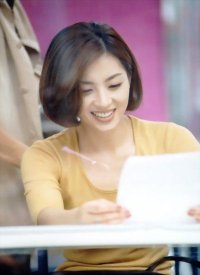 It has been revealed that Song Yoon-ah, who has received the main role in the new SBS drama "On Air", had willingly lowered her guarantee.

The pay per episode that Song Yoon-ah receives for "On Air" is 70% of what she normally receives. Director Oh Myeong-hwa of Song Yoon-ah's entertainment company Star Art, revealed, "She lowered the salary for the completion of the drama".

The lowering of celebrities' values is occurring in the movie industry as well. For the movie, "Forever the Moment", Moon So-ri, Kim Jung-eun, and Uhm Tae-woong lowered their guarantees to reduce production costs. Park Hae-il and Kim Hye-soo also accepted their main roles at a lower guarantee than usual for "Modern Boy", due to come out in May.

"Song Yoon-ah joins to lower celebrities' values: willingly decreases salary for 'On Air'"
by HanCinema is licensed under a Creative Commons Attribution-Share Alike 3.0 Unported License.
Based on a work from this source