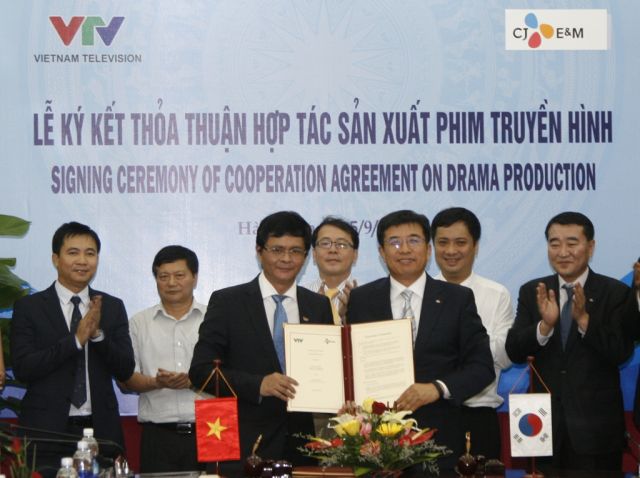 Korea and Vietnam are accelerating cultural exchange through coproduction of TV drama.

Owned by the government of Vietnam, VTV is the national television broadcaster of Vietnam. CJ E&M and VTV aim to strengthen cultural exchange and production ability between the two countries by signing the agreement to coproduce TV drama. Especially, CJ E&M VTV are expected to provide their utmost support for coproduction since it is the very first coproduced drama for both countries.

The drama will be a story of lives of young students in Korea and Vietnam to target a young audience in Vietnam. CJ E&M and VTV are co-investing and coproducing the art on a 50:50 ratio, and this will be broadcast on a total entertainment channel VTV3, the highest-rated channel of VTV.

Its professional strategy to localize original Korean contents has been noticeably successful. For example, 'A Wedding Invitation (分手合约)' made the biggest box-office success with profits of 191.9 million Yuan in China as a joint production of Korean and Chinese film companies. 'Superstar China (我的中国星)' based on renowned Korean singing survival show 'Superstar K' is on air in great success via Hubei TV that owns 800 million viewers. 'Finding Mr. Destiny', the original Korean musical to be performed in China for the first time, achieved success as well. In addition, CJ E&M and Super Jet Entertainment coproduced Chinese-Korean idol group 'TimeZ', exporting K-Pop culture worldwide by localizing Hallyu.

CJ E&M's CEO Kang Seok Hee notes, "It is a stepping stone for cultural exchange between Korea and Vietnam to enhance mutual benefit and progress in terms of production ability through this first joint production", and also "Among South East Asian countries, Vietnam has the highest growth potential in cultural content due to a number of young people. I will dedicate my best efforts to expand on non-governmental interchange between the two countries to help their culture industry flourish.