Korean cinema expert Darcy Paquet looks back at the results of 2011's box office with some unexpected hits and misses, the rise of independent features, and how audiences confirmed they value story over spectacle. 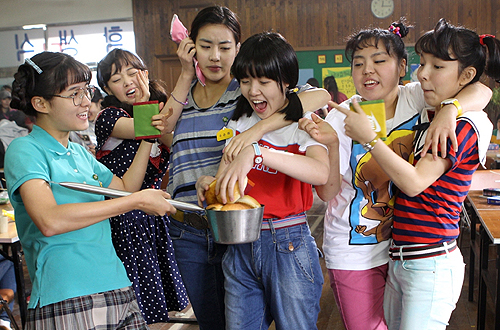 Although the number crunchers in Hollywood estimate that US theatrical admissions sank to their lowest level since 1995, things were not so gloomy in Korea. With an estimated 160 million tickets sold (more precise figures will become available at a later date), it appears that Korea has approached or broken the modern-day record for admissions. In 2010, total admissions stopped at 146.8 million. In monetary terms, 2011 was certainly the best year ever, given the 3D surcharge and rising average ticket prices. Americans may be growing tired of the theatrical movie-going experience, but young Koreans still crowd the multiplexes.

Local films also turned in a decent performance in 2011, with the market share of Korean cinema estimated to be around 53%. This is the highest level since the record-breaking year of 2006 (which saw 63.8%), and the fifth highest mark of all-time. Of course, that does not mean that all is well in the local film sector, but the industry's overall performance has to be taken as a positive sign.

Nonetheless, some of the biggest stories of 2011 involved films that grossly underperformed expectations. It was not a good year for the Korean blockbuster. Big-budget, special effects driven genre films had been expected to dominate the summer and winter vacation periods. In the end, however, neither splashy marketing campaigns nor the distribution power of their major investors were enough to combat the lukewarm word-of-mouth received by the year's biggest films on the internet and on social media such as Twitter.

Some examples include the motorcycle action film "Quick", which devoted much of its hefty budget to creating spectacular car/motorcycle chases and outlandish pyrotechnics. Released in July, the film was not a total failure with 3.13 million admissions recorded. Nonetheless, this fell considerably short of investors' expectations. Released on the same day, the ambitious Korean War movie "The Front Line" by up-and-coming director JANG Hun received better reviews from critics, but ordinary viewers showed only weak interest, and the film ended up grossing a disappointing 2.95 million admissions.

Only one blockbuster-sized production ended up connecting with audiences over the summer months. "Arrow, The Ultimate Weapon", directed by Kim Han-min and starring Park Hae-il, is an ambitiously conceived period action film about a skilled archer trying to save his sister and her fiancé from an invading Manchu army. Praised by viewers for its fast pacing and combat sequences, the Lotte Entertainment release sold 7.46 million tickets to become the highest grossing Korean film of 2011 - trailing behind only "Transformers: Dark of the Moon", which took 7.79 million admissions.

By the end of the summer, top distributor CJ E&M was smarting from the combined losses of "Sector 7", "Quick", and the high-profile action melodrama "Hindsight" with top star Song Kang-ho and Shin Se-kyung, which only managed to gross 770,000 admissions. But encouragement would come from unexpected quarters.

First, the mid-sized film "Silenced", released in September, turned into an unexpected national phenomenon, leading to ticket sales of 4.67 million admissions. The film is based on a harrowing real-life incident in which young students at a school for the deaf were sexually assaulted by school officials. Popular outrage over the lack of justice in the incident portrayed in the film even led to legislation of new laws to provide additional protection to the disabled against sexual abuse.

The following month, another mid-sized film turned in a much stronger than expected performance. "Punch" by director Lee Han tells of the uneasy friendship that develops between a high school boy (Yoo Ah-in) and his teacher (Kim Yun-seok), who also happens to be his next door neighbor. One day the teacher tells him that he has located the boy's mother, who ran away when he was just a baby. The boy is further shocked to learn that his mother is from the Philippines. After receiving widespread praise in Korea, "Punch" will screen in the Generation section of the upcoming Berlin International Film Festival.

Early December produced another decent-sized hit in the romantic comedy "Spellbound" from debut director Hwang In-ho. A love story that incorporates some of the conventions of the horror genre, the film features hallyu star Son Ye-jin as a young woman who, after a near death experience, is tormented by visions of dead people. Powered by positive word-of-mouth, the film managed to sell 2.77 million tickets by the end of the year. That made it by far the most successful of a string of Korean romantic comedies released in the late autumn season, including "You Pet" (544,000 admissions), "Penny Pinchers" (424,000 admissions), and "Couples" (361,000 admissions).

However CJ E&M's string of surprise hits would come to an end with the underperformance of one of the year's most anticipated films. The blockbuster-scale war movie "My Way" is directed by Kang Je-gyu, who was responsible for such past record-breaking hits as "Shiri" (1999) and "Taegukgi" (2004). With a US$25 million budget (Korea's highest ever) and a cast including major Asian stars like Jang Dong-gun, Joe Odagiri and Fan Bingbing, "My Way" was expected to dominate the theaters during the lucrative winter vacation season. However it encountered stronger than expected competition from "Mission: Impossible - Ghost Protocol", released on Dec. 15, and it also received a lukewarm response from viewers. From its release Dec. 21 to the end of the year, "My Way" sold 1.58 million tickets - only a small fraction of what it would need in order to break even.

The conclusion one is tempted to draw from the performance of individual Korean films in 2011 is that local audiences are much more interested in story than spectacle. Results from the first half of the year also seem to bear this out. The first major hit was "Detective K", a comedy set during the Joseon Dynasty notable for the witty depiction of its two lead characters, played by Kim Myung-min and Oh Dal-soo. The film earned an impressive 4.76 million admissions for small production company Generation Blue Films over the Lunar New Year holiday season.

Even more successful was the comic drama "Sunny - 2010", the second film by young director Kang Hyeong-cheol after his tremendously successful debut "Speedy Scandal" (2008). Released on May 4, "Sunny - 2010" tells the story of five women, crosscutting between their lives in the present and the experiences that first brought them together as teenagers in the 1980s. Distinguished for its humor and the performances of its ensemble cast, the film shattered the common belief that women-centered pictures can't achieve blockbuster-level success. At the end of its long run, the film's box office total stood at 7.38 million admissions, with an additional 90,555 admissions recorded by a director's cut re-release.

Nonetheless, despite the weakness of big-budget films and the strength of story-centered, mid-sized works in 2011, it might be appropriate to remember that this is not the first time that the Korean blockbuster has suffered through a crisis. Notably in 2002, after the failure of big-budget works like "Yesterday", "R.U. Ready?" and "Resurrection of the Little Match Girl", commentators pronounced the Korean blockbuster dead, only to have it resurrect a couple years later with the success of "Silmido" and "Taegukgi".

The year 2011 was notable for another reason, in that locally produced animated works enjoyed their best year ever. Despite a high degree of technical competence, developed over years of doing outsourcing work for foreign companies, Korean animators have struggled to find success with original features. This year, however, the box office jinx was finally broken by "Leafie, A Hen Into The Wild", a feature-length movie based on a best-selling Korean children's book. Directed by Oh Seong-yoon and produced by the much respected Jaime SHIM, the film is about a hen (voiced by award-winning actress Moon So-ri) who escapes into the wild and ends up adopting a young duckling. Particularly popular with family audiences who were familiar with the original book, "Leafie" sold 2.2 million tickets to earn a healthy profit even before international sales are taken into account.

Although produced on a much smaller scale, a second animated feature from Korea also drew notice from critics and viewers. "King of Pigs" by Yeon Sang-ho was made for $150,000, but the visceral power of the film made it stand out from other animated features produced over the past several years. After winning several awards at the Busan International Film Festival in October, the film was released the following month and ended up selling 18,948 tickets. This may not sound like much compared to a mainstream commercial film, but for independent features, 10,000 admissions is generally considered the mark of a highly successful release.

Which brings us to another aspect of the Korean box office in 2011: the performance of independent features. The commercial success or failure of such works are judged on a very different scale from that of the rest of the industry, given the fact that they are generally released on only a few screens.

"King of Pigs" proved to be not the only success of the independent sector, with particular notice being paid to the film "Bleak Night" by debut director Yoon Sung-hyun. After winning acclaim at the Busan International Film Festival in 2010, the film recorded 22,015 admissions in early 2011 and was especially noted for the breakout performance of actor Lee Je-hoon. Similarly, the film "Re-encounter" by debut director by Min Yong-keun sold 11,243 tickets and helped to launch the career of new actress Yoo Da-in.

"The Journals of Musan", a highly acclaimed debut feature that won over 18 awards at international film festivals, was released to strong reviews in Korea and a box office tally of 11,250.

Finally, Korean independent documentaries also had a decent year, with notable performances by the films "The True-taste Show" (12,447 tickets), about restaurant recommendations on major TV broadcast networks; and "Dancing Cat" (11,614 tickets), focused on the plight of street cats.

"South Korean Box Office in 2011"
by HanCinema is licensed under a Creative Commons Attribution-Share Alike 3.0 Unported License.
Based on a work from this source