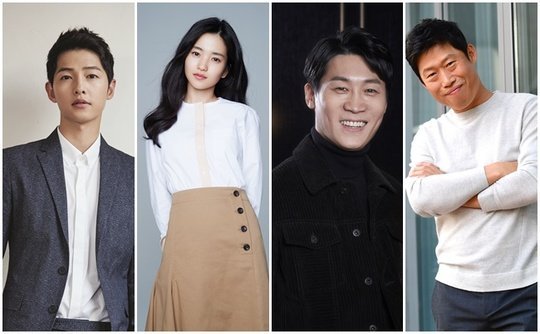 Song Joong-ki, Kim Tae-ri, Jin Seon-kyu and Yoo Hae-jin are on board for "Space Sweepers".

The movie "Space Sweepers" is a science fiction film set against the endless backdrop of space with never before seen in Korea visuals and story. Song Joong-ki, Kim Tae-ri, Jin Seon-kyu and Yoo Hae-jin have confirmed their casting in the movie.

Actor Song Joong-ki, who has a creditable reputation in Korea and all of Asia for his outstanding performance and good looks, plays Tae-ho, the problematic pilot of The Victory who will do anything that involves money, but is always broke. This casting is even more interesting, because it's Song Joong-ki's first reunion with director Jo Sung-hee from "A Werewolf Boy", which caused a syndrome in 2012.

"The Handmaiden", "Little Forest", and "Mr. Sunshine" actress Kim Tae-ri plays the captain of "Space Sweepers" who is very passionate and ambitious. Tiger Park, the keeper of "Space Sweepers" is played by Jin Seon-kyu, who gained attention on himself for his role in "The Outlaws" and was part of the movie "Extreme Job", which rounded up over 16 million viewers early this year.

Finally, Yoo Hae-jin, who is always up for a change and stands out with his unique character, is attempting a role involving robotic motion capture and voice acting for the first time in Korea.

""Space Sweepers" Song Joong-ki, Kim Tae-ri, Jin Seon-kyu, Yoo Hae-jin on Board "
by HanCinema is licensed under a Creative Commons Attribution-Share Alike 3.0 Unported License.
Based on a work from this source