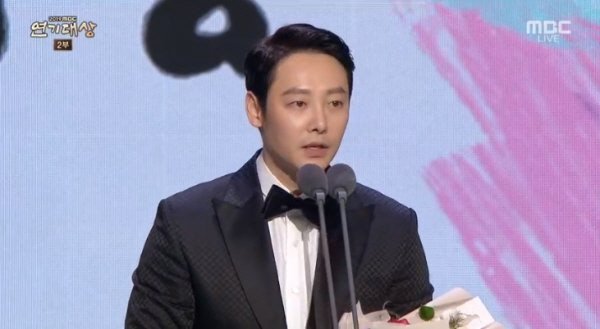 With hosts Kim Sung-joo and Han Hye-jin, the 2019 MBC Drama Awards were held at the MBC Hall in Mapo, Seoul on the 30th.

Kim Dong-wook had the honor of winning Best Actor as well as the Grand Prize, and said in his speech, "I think I've made two terrible mistakes".

He continued, "It feels like a dream. I know I have had less weight on the viewers as the leading actor in the drama compared to the others on the list of candidates. I worked hard thinking it was my last. I don't know what to do with this prize. I promise not to be lazy".

Meanwhile, Drama of the Year went to "Extraordinary You" instead of "Partners for Justice Season 2", "One Spring Night", "Rookie Historian Goo Hae-ryung", and "Special Labor Inspector, Mr. Jo".

""Special Labor Inspector, Mr. Jo" Kim Dong-wook Becomes the Winner of the 2019 MBC Drama Awards' Grand Prize"
by HanCinema is licensed under a Creative Commons Attribution-Share Alike 3.0 Unported License.
Based on a work from this source