"Speed" Lee Sang-ah to come back with melodrama 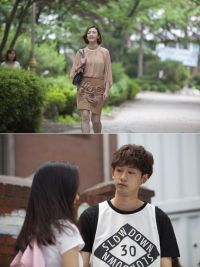 Lee Sang-ah is coming back with "Speed" as Mi-ja who is in innocent love with Dae-seong who is 20 years younger than her. She pretends to be Seo-won's mother and helps Dae-seong's friends. Chu-won, Seo-won and Gu-rim can't understand how Dae-seong can be in love with someone old enough to be their mother, but the two love each other more than any other in the whole world.

Lee Sang-ah starred in a 1985 movie as a child actress and studied Drama and Cinema in the Seoul College of Arts. She exposed herself in the Im Kwon-taek movie and became one of the greatest high-teen star of the 80s along with Ha Hee-ra.

"Speed" is a youthful movie about 4 friends who have just reached their 20s starring Seo Jun-young, Baek Sung-hyun, Choi Tae-hwan, Byun Joon-suk and more. Lee Sang-ah plays a mother who is in love with a man in his 20s and Im Hyeong-joon is a teacher. The movie comes out on the 15th of October.

""Speed" Lee Sang-ah to come back with melodrama"
by HanCinema is licensed under a Creative Commons Attribution-Share Alike 3.0 Unported License.
Based on a work from this source