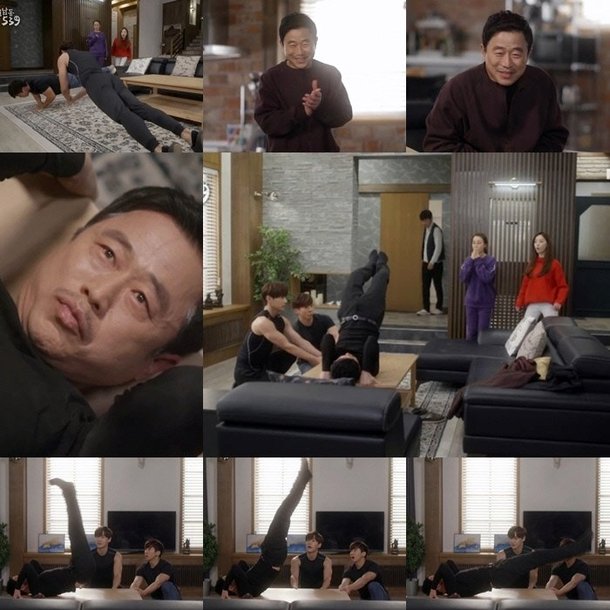 On the latest episode of the MBN drama "539 Yeonnam-dong", the men showed off their muscular bodies and showed off in front of the women.

One morning at the share-house, Ryan (Brian Joo) was doing pushups in the living room in a tight T-shirt. Soo-ri (Yang Jung-won) who was coming down from the stairs noticed him and commented, which made Ryan workout harder.

Tae-yeong (Choi Woo-hyuk-II) was encouraged and also did pushups next to Ryan in a sleeveless shirt that showed his muscular arms. Do-hee (Koh Woo-ri) came out of the kitchen just then and fell in love with Tae-yeong who then started clapping his hands in mid-air.

Jordan (Lee Moon-sik) came out from the kitchen and scoffed at them. He got down on his back and showed them the Dragon Fly pose.

Jordan lifted his legs straight up to be in line with his body and repeated lifting them up and down.

Soo-ri and Do-hee were amazed at his arms and kept saying that was a very difficult pose.

Apparently, Lee Moon-sik works out very hard despite his busy schedule. He even promised to reveal his abs if the movie "Gate" was successful.

"[Spoiler] "539 Yeonnam-dong" Lee Moon-sik's Impressive Dragon Fly Pose "
by HanCinema is licensed under a Creative Commons Attribution-Share Alike 3.0 Unported License.
Based on a work from this source