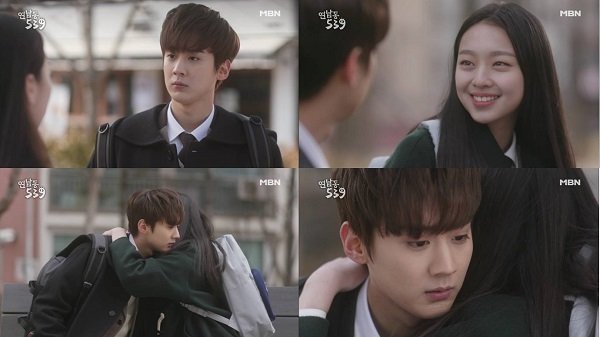 Chunji plays Jo Da-woon in the MBN drama "539 Yeonnam-dong" and he confessed to his classmate Hye-ryung (Lee Soo-min). Jo Da-woon is handsome and many female students like him, but he is cold and aloof towards them. On the other hand, he's always liked Hye-ryung and to her, he's the nicest guy and he hugged her right after confessing to her.

Hye-ryung has a mother with troubled eyes and a younger sibling. Although life is tough for her, she's always bright. Jo Da-woon was attracted to her upbeat personality and started studying to get into the same university as her. He even goes with her to the library to study. When they ended up in the same class, Jo Da-woon said, "We're classmates again. This is what I call fate!" Hye-ryung replied to that saying, "If there is such a thing as fate then I guess we'll be in the same school next year?"

They have a lot in common; they are from one-parent families and lots of love for their mothers. Hye-ryung embraced Jo Da-woon into a hug and said, "Let's make our mothers proud".

"[Spoiler] "539 Yeonnam-dong" Teen Top Chunji's Epic Confession"
by HanCinema is licensed under a Creative Commons Attribution-Share Alike 3.0 Unported License.
Based on a work from this source