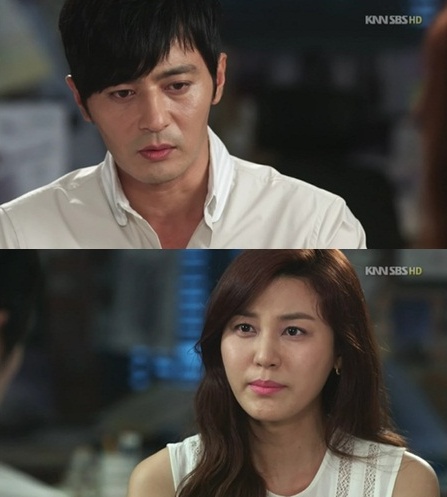 As it turned out Kim Do-jin (Jang Dong-gun) is the father of Collin (Lee Jong-hyeon), he broke up with Seo Ee-soo (Kim Ha-neul).

The fourteenth episode of SBS weekend drama "A Gentleman's Dignity" on the 8th showed that Kim Do-jin was Collin's father.

Collin showed up in front of the four men and said, "One of you is my father and I've come to find him". Unlike his other friends, Do-jin asked, "What year were you born? Take out your passport" and other detailed questions. Then when he learned that Collin was born in 1994, he told his friends he might be the father.

Do-jin called his ex-girlfriend and Collin's mother Kim Eun hee (Park Joo-mi) and checked for sure that he was the father and then called Ee-soo to meet up. He told her, "Listen carefully and I am sorry about what I am going to say. Forget I asked you to live with me. Forget that I promised you happiness. I can't keep the promise that I won't break up with you before you do. I am a bag person so forget me if possible".

Ee-soo asked if he was his son and Do-jin answered yes and said, "It's not that I don't have the guts to live forever with a woman but I don't have the right. I think this kid is punishing me for hurting others. Forget me no matter what".

Ee-soo said alright and got up from her seat then cried.

"[Spoiler] "A Gentleman's Dignity" Jang Dong-gun breaks up with Kim Ha-neul"
by HanCinema is licensed under a Creative Commons Attribution-Share Alike 3.0 Unported License.
Based on a work from this source