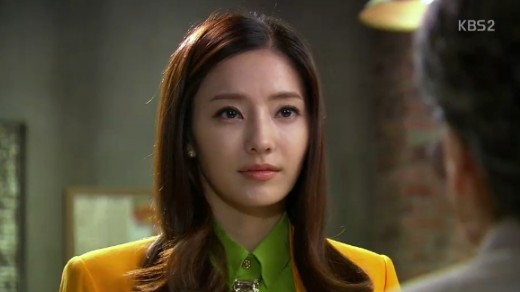 Han Chae-yeong who dumped her old boyfriend Jin Goo for specs, did her part for him.

She attended the Giants Opening ceremony and greeted So-ran (Han Sunhwa) and Ad Genius Lee Tae-baek's family. Ah-ri erased her past for spec laundering and dumped the boyfriend who waited for her for years. So-ran wasn't happy with Tae-baek still being unable to forget the girl who dumped him.

So-ran was cynical about Ah-ri and asked, "Why are you being nice all of a sudden. Just be". Gwan-soon (Jung Young-sook) was different. She said, "I heard what you did. You must've had a reason of your own. You are like my grandchild. Take care of yourself and be well". Ah-ri was moved and she cried, meanwhile, Tae-baek who watched this seemed complicated.

However, what they were was in the past and they were walking down their own paths. Tae-baek was seeing Ji-yoon (Park Ha-sun) but Ah-ri wasn't showing any progress with Eddie (Jo Hyun-jae).

"[Spoiler] "Ad Genius Lee Tae-baek" Han Chae-yeong does what she has to for Jin Goo"
by HanCinema is licensed under a Creative Commons Attribution-Share Alike 3.0 Unported License.
Based on a work from this source