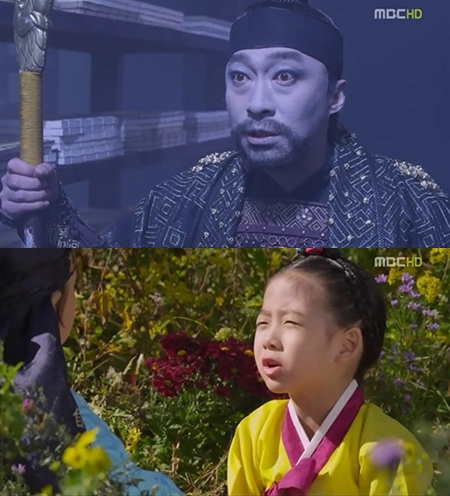 The appearances of special cameos were interesting in the last episode of "Arang and the Magistrate".

Lee Sung-min and Park Min-ha appeared on the final twentieth episode of the MBC drama "Arang and the Magistrate" on the 18th.

Lee Sung-min appeared as the gatekeeper of the storage room that Kim Eun-oh (Lee Joon-gi) stopped by to find the person responsible for Arang's (Shin Min-ah) death. He was made up in dark eyeliner and was created a creepy atmosphere around him by not even flinching when he repeated the long line.

At the end of the episode, Park Min-ha appeared as Arang's younger self. When Kim Eun-oh didn't remember the reborn Arang but she did, Park Min-ha said in full speed, "See, I told you not to drink the well of oblivion but you did! I told you several times not to drink it. Don't you remember me? What use is it if only I Remember You? This is memory loss".

Lee Sung-min and Park Min-ha presented laughter and fun to the viewers with their special appearances. The viewers posted on the bulletin, "Lee Sung-min's eyeliner is awesome. He's scary but funny", "It reminded me of Choi In-hyeok from "Golden Time"", "The way she goes on at full speed is so cute" and more.

Meanwhile, Kim Eun-oh and Arang met again as little kids when they were reborn and ended in a happy ending.

Coming up next in place of "Arang and the Magistrate" is "Missing You", a drama about a love like hide and seek between a man and a woman starring Park Yoo-chun and Yoon Eun-hye in November.

"[Spoiler] "Arang" special cameo appearances, Lee Seong-min and Park Min-ha"
by HanCinema is licensed under a Creative Commons Attribution-Share Alike 3.0 Unported License.
Based on a work from this source