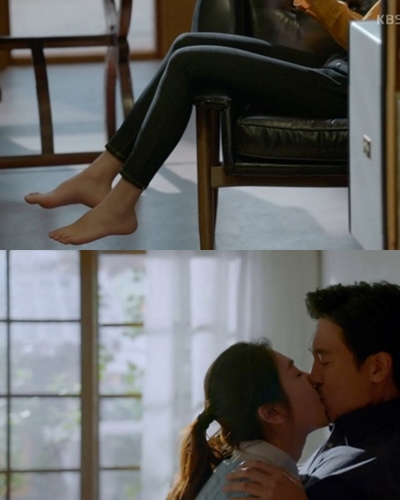 "Babysitter" caught the viewers' attention with its shocking storyline from the very first episode.

The story of an affair between Yoo Sang-won (Kim Min-joon) and Jang Suk-joo (Shin Yoon-joo) was aired on the KBS2 "Babysitter" (written by Choi Hyo-bi, directed by Kim Yong-soo-I) on the 14th.

Jang Suk-ryu made Yoo Sang-won jealous by talking to Pyo Young-Gyoon (Lee Seung-joon) on the phone, making Yoo Sang-won forcefully kiss Jang Suk-ryu. Jang Suk-Ryu did not let Yoo Sang-won kiss her at first, but she kisses him aggressively later on. At dinner, Yoo Sang-won and Jang Suk-ryu's feet were touching under the dinner table with Cheon Eun-joo.

"Babysitter" rated last place with 3.1%, which is being aired after 'Moorim School'.

"[Spoiler] 'Babysitter' first episode reveals a shocking affair from the beginning"
by HanCinema is licensed under a Creative Commons Attribution-Share Alike 3.0 Unported License.
Based on a work from this source