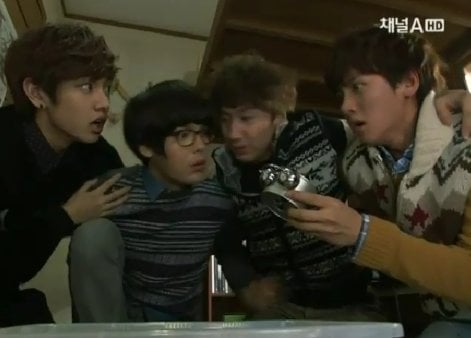 They then met the mysterious Kim and were surprised by the fact that she was a woman. Understanding a hint from what she said, Tae-yang completed the first survival mission necessary to establish their vegetable shop. They were all overwhelmed with happiness at their success.

However, they realized that the application deadline had just passed and headed to the office. Because of the firm attitude of the employee who said their first mission couldn't be accepted, the men laid down in the middle of the office floor and showed their strong wills.

In-beom (Jeon Noh-min) then appeared and Tae-yang didn't lose this chance to show him his spirit and passion. In-beom set aside their tardiness when Tae-yang told him, "If you let us pass through the first mission you can give us a penalty in the second one, just so it is fair".

The boys were able to pass through the first mission and now they are about to face the second challenge.

"[Spoiler] "Bachelor's Vegetable Store" Bachelor's survive their first opening mission "
by HanCinema is licensed under a Creative Commons Attribution-Share Alike 3.0 Unported License.
Based on a work from this source