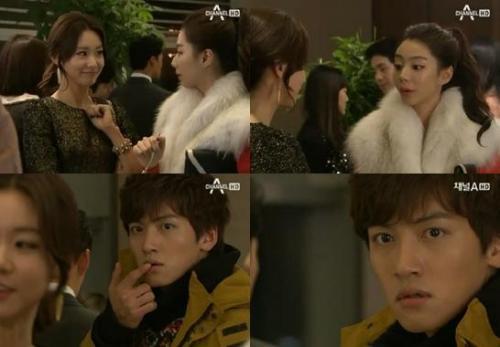 Ji Chang-wook found out that Wang Ji-hye was the only daughter of Mok Yeong Group.

Tae-yang left Ga-on and Seul-woo together to help them resolve the uncomfortable issues between them. While tasting the vegetable samples, Tae-yang was shocked and left the event when he overheard Dan-bi (Park Soo-jin) pointing to Ga-on and telling her friend that she was the only daughter of Mok Yeong Group.

He understood that Ga-on and him were in different circumstances but he soon became steady and faced Ga-on. They had a fun time having dinner and such on their date.

At the end of the episode Tae-yang asked her, "We still don't know each other's names, tell me your name". When she did, he fell into confusion once again as her name was the same as a friend who died at a young age due to an unfortunate accident.

"[Spoiler] "Bachelor's Vegetable Store" Ji Chang-wook finds out about Wang Ji-hye"
by HanCinema is licensed under a Creative Commons Attribution-Share Alike 3.0 Unported License.
Based on a work from this source