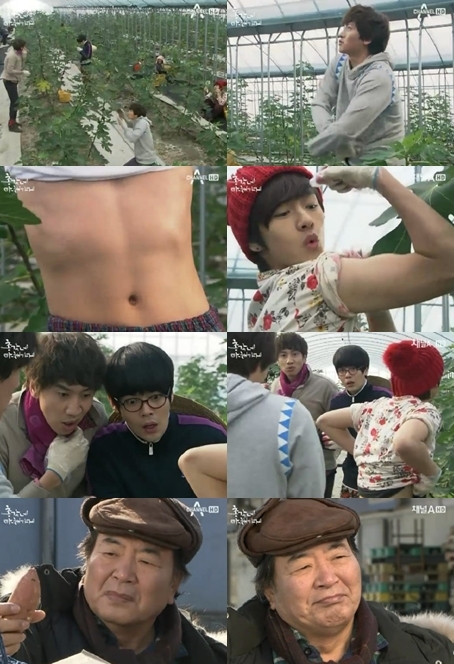 Han Tae-yang (Ji Chang-wook) announced that he will repay back the money to Jeong Goo-kwang (Jang Hang-sun) by working. Then he suggested flying in figs from the farms in the countryside.

Han Tae-yang gathered Yeong Nong heir Nam Yoo-bong (Lee Kwang-soo) and Yoon Ho-jae (Jihyuk), who was preparing for a job, as well as wannabe singer Lee Chan-sol (Shin Won-ho) to work on the figs down in the countryside.

While working, Han Tae-yang, Nam Yoo-bong, Yoon Ho-jae and Lee Chan-sol took off their shirts while picking figs and worked hard to earn the generosity of the ladies in the farm. However, they were all scratched from the fig leaves, causing rashes, and had to be admitted to the hospital.

Despite that, Han Tae-yang went back to the farm with his sore body to keep the promise he make with Jeong Goo-kwang.

The owner of the farm was moved by this and preached to him about the mental attitude of wanting to start a business and gave him sweet potatoes instead of figs. Jeong Goo-kwang loved this, as they were products of the Keum San Farm.

Meanwhile, Han Tae-in (Lee Se-young) signed up for the gym where Jeong Dan-bi (Park Soo-jin) was working as a yoga teacher to get closer to her.

"[Spoiler] "Bachelor's Vegetable Store" Ji Chang-wook wins over Jang Hang-sun with spite and patience"
by HanCinema is licensed under a Creative Commons Attribution-Share Alike 3.0 Unported License.
Based on a work from this source