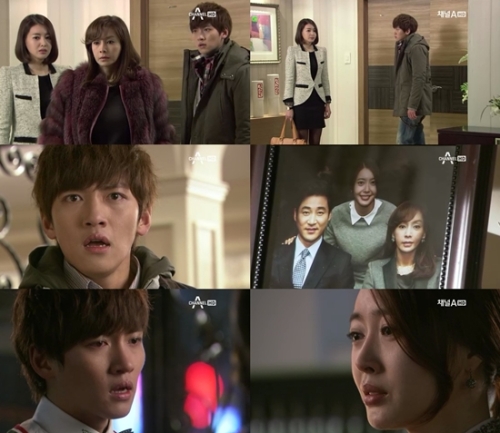 Wang Ji-hye's secret from the Channel A drama "Bachelor's Vegetable Store" has been revealed.

On the sixteenth episode of "Bachelor's Vegetable Store" Han Tae-yang (Ji Chang-wook) witnessed Mok Ga-on (Wang Ji-hye) and Choi Kang-seon together and began to suspect them.

Tae-yang visits the home of chairman Mok In-beom (Jeon Noh-min) and asks to meet his wife to reveal the relationship between Ga-on and Kang-seon.

After being told to leave, Tae-yang sees a family picture in the living room and believes that Ga-on is true.

Tae-yang told Ga-on who kept hiding that she meant it, "I think the magic's undone" with a hint of goodbye and the two broke off like they were never going to see each other again.

Kang-seon persuaded Ga-on to go find Tae-yang because she was afraid of getting her secret caught by chairman Mok. Tae-yang then walked away when Ga-on said, "Let me live as Mok Ga-on and pretend you don't know me".

"Bachelor's Vegetable Store" can be seen every Wednesday and Thursday at 8:50PM.

"[Spoiler] "Bachelor's Vegetable Store" Wang Ji-hye's secret revealed"
by HanCinema is licensed under a Creative Commons Attribution-Share Alike 3.0 Unported License.
Based on a work from this source