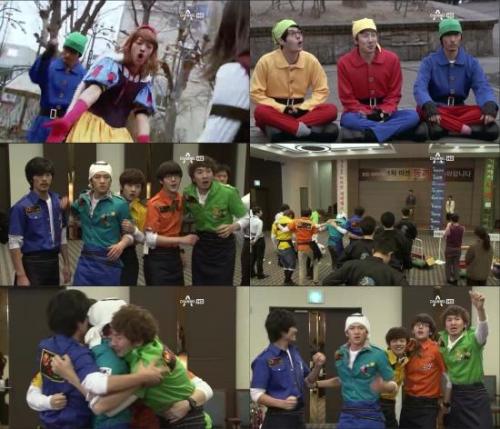 They made themselves up into Snow White and the Seven Dwarfs to carry out the second mission, which was to sell as many apples as they could in a set amount of time, and succeeded in explaining to the public how to choose a tasty apple.

Tae-yang and Chan-sol also managed to make things more interesting by holding a 'shuffle dance' while dressed up as women.

The next day it seemed like they were going to be in second place for selling two less apples than another team, but their promoting skills earned them more points and added a twist. They became the winners of the Mokyeong Group Survival Project and won six months of free rent and KRW30 million in cash.

"[Spoiler] "Bachelor's Vegetable Store" wins its survival mission"
by HanCinema is licensed under a Creative Commons Attribution-Share Alike 3.0 Unported License.
Based on a work from this source