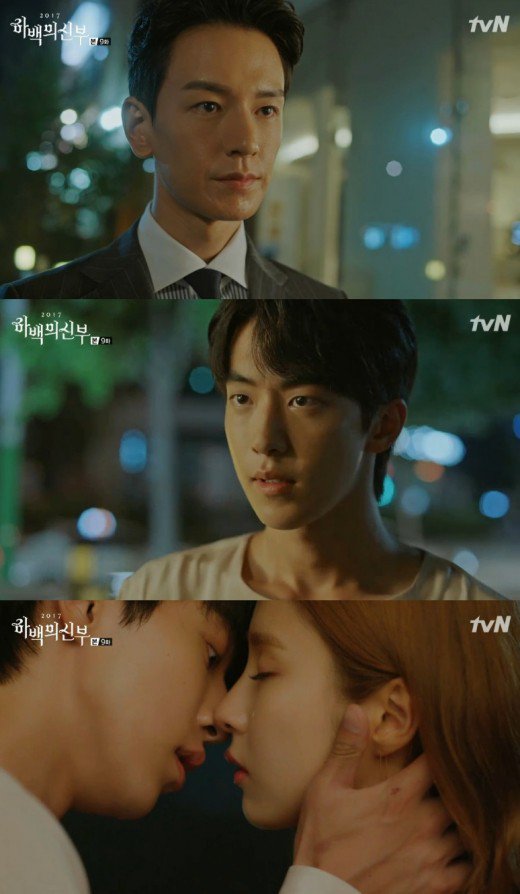 Nam Joo-hyuk and Sin Se-kyeong kissed in tears. Although Lim Ju-hwan tried to get her attention, she only had eyes for Nam Joo-hyuk.

On the latest episode of the tvN drama "Bride of the Water God 2017", Hoo Ye (Lim Ju-hwan) told Ha Baek (Nam Joo-hyuk) about his love and passion for So-ah (Sin Se-kyeong).

Hoo Ye was testing his half human and half god powers when Jaya (Bae Nuri) caught him. She said, "I saw you. You were doing something to that flower. I don't think that can be explained logically or scientifically. Then I realized, you're a pervert". She then asked, "Do you know how to do magic, too?"

Hoo Ye was relieved. He was about to use his powers with Jaya in his arms but he stopped himself. Resistance is what he learned in the human world.

Bi Ryeom (Gong Myung) was fixing Joo Dong's (Yang Dong-geun) memory and said, "You break and we fix; this is how we are different". He attacked Hoo Ye.

Then Hoo Ye found out that the doors to the gods' world was at the plot of land where the resort was going to be built. Bi Ryeom appeared just in time and swung his fist at Hoo Ye for overlooking their land when he was only half-god.

Hoo Ye didn't stay humiliated. He said to him, "The crucial difference between you and I; I'm going to try it. I will leave it up to your petty imaginations. One more thing, your friend that's "Broken", I did it. But what does it change that I've made a confession? What are you going to do to me? Can you do it better than me?"

Ha Baek appeared and told Hoo Ye that nothing was going to change even if he had the door to the gods' world but Hoo Ye said, "I don't care for that. What I want now is Yoon So-ah. You are the first thing I've wanted since I started living here". Ha Baek told him So-ah was a slave of the god and Hoo Ye said, "I don't care. This is the human world and this is my area. I don't have a care for the gods' world".

So-ah told Ha Baek that she cancelled the contract she had with Hoo Ye but he didn't believe it. So-ah told him the truth in tears and Ha Baek said, "I am going back, I have to go back" and kissed her.

"[Spoiler] "Bride of the Water God 2017" Nam Joo-hyuk and Shin Se-kyung kiss in tears "
by HanCinema is licensed under a Creative Commons Attribution-Share Alike 3.0 Unported License.
Based on a work from this source