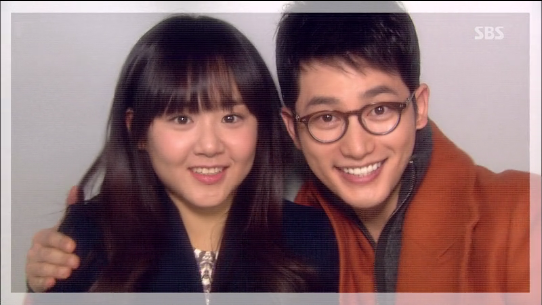 We get some cute and a lot of stupid. I'm starting to weary of the plot, but I'm in it for PSH. Was there ever a doubt?

"I'm no longer afraid. If you want to block my path, find another way", Se-kyung tells Tommy Hong. He smirks and tells her she won't be able to tell Psycho-jo the truth, but she throws it back at him. Tommy is the one who won't be able to tell or he'll be finished forever. She may lose Psycho-jo if she tells the truth and what she's worked so hard for, Tommy warns, to which she replies that she'll be able to give him up then. He tries to knock her down again, "You'll probably leave to trudge down a long and tedious road with nothing at the end". Again,  her answer wipes that annoying smirk from his face, "That's me from the start, anyway". Ha! Besides, she's learned not to just sign any kind of contract because it becomes a debt, which then becomes a loan. No contract for him!

She storms out, leaving him fuming. Outside she gathers her composure and then answers a call from Ah-jung telling her that Psycho-jo is still waiting outside for her. She runs to him thinking that the idiot could've waited for her inside. Aw, cute, you're calling him names already.

Team Mad Rabbit watches Psycho-jo the stubborn wait in the cold and finally they introduce each other. Haha. I love how they're Team  Mad Rabbit and don't even know each other's names.

Se-kyung shows up and they watch in anticipation. She hesitates before going to him, hearing Tommy tell her she may not get what she wants if she tells Psycho-jo the truth. Psycho-jo turns and sees her, greeting her with a gorgeous smile. He nervously asks her if she's accepting him. She wants to tell him something, as does he, and adorably keeps asking if she'll have him all while freezing from waiting outside for too long.

She nods and he picks her ups, spinning her around, receiving a cheer from warm Team Mad Rabbit in Psycho-jo's car. Psycho-jo thanks her, joking that he thought he'd freeze. Team Mad Rabbit joins them, taking pictures. They ask if they should set up the projector, flashing a jump drive, but Psycho-jo forbids it.

They go into a pojangmacha. (Why not somewhere that's really inside?) Se-kyung fusses over him, giving him her scarf and putting her hand and a warm drink against his cheeks. He grins that they really seem like a couple now and adorably directly the warm drink to different locations on his face. She smiles indulgently and I *squee*

In her massive wardrobe, Coach Tick remembers seeing Psycho-jo and then receives a call from Ho-min. He wonders what's been going on because she's been hard to get a hold of but she tells him that nothing is wrong and hangs up.

Tommy is impressed by how shrewd Se-kyung is. Ugly love is still love and if Tommy reveals the truth to Psycho-jo, Tommy won't have contact with him again, which ruins his chances of arranging the marriage and getting the Olympic sponsorship. But Se-kyung can't easily tell the truth either, Tommy deduces and has someone named Hae-joon put on her tail.

Se-kyung walks her new boyfriend home and tells him to take a warm shower. He sends her off first and adorably stops her twice to tell her to return safely and that he'll see her tomorrow.

Inside, he almost trips because he's so happy and buries his face in her scarf. He surfaces with a serious face and his eyes begin to water. Then he smiles, a man in love.

Se-kyung receives a text from him with a picture of the happy bunny asking where she wants to meet. She says that anywhere is fine and ends with "^^", which greatly pleases him. He tells her to leave tomorrow to him to which she replies, "Okay. ^^" He excitedly hugs the bunny as she promises herself that she will tell him everything tomorrow.

And we can pretty much assume nothing goes right, right?

Ah-jung and Se-jin tell the parents about the new couple. Mom is unreservedly happy while dad warns the women to keep their mouths shut until Se-kyung shows up.

"[Spoiler] Cheongdam-dong Alice: Episode 10 Recap"
by HanCinema is licensed under a Creative Commons Attribution-Share Alike 3.0 Unported License.
Based on a work from this source