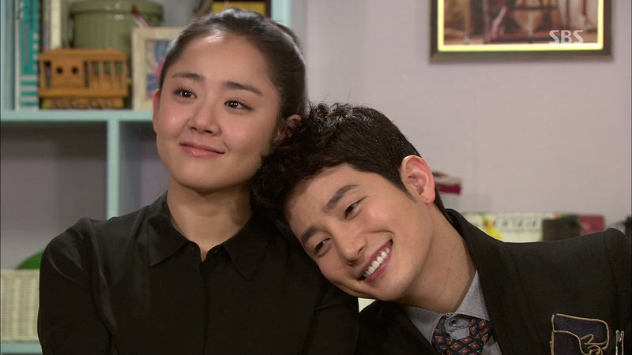 I could barely get through this episode. This show is just so all over the place with character motivations/development, plot motion (or lack thereof). At least uri Park Shi-hoo is adorable. Moon Geun-young also looks really pretty with her hair in a ponytail and the change in make-up. Her eyeliner isn't as thick.

Okay, that's sad. I'm talking about eyeliner and not the show...

We left off with a declaration of marriage and some very shocked and angry Se-kyung anti-fans. Psycho-jo asks them to take care of Se-kyung at GN Fashion and then Daddy Cha takes them into a room to yell. He is pissed that Psycho-jo is using marriage for revenge, but Psycho-jo declares that he loves Se-kyung and this isn't revenge.

Baby, I don't care how you spin it, but showing off your girl to the father you've been competing with is not a good thing.

Psycho-jo came to the bazaar to declare his love publicly to dispel rumors of his marriage.

In another room, Mama Shin, In-hwa and Min-hyuk are laying into Tommy. They thought they didn't have to worry about Se-kyung. Min-hyuk is furious that they are humiliated by a part-timer at their own company. In-hwa tells them to stop because the arguing is making her lose face more. Besides, she has lost interest in Psycho-jo who doesn't realize the importance of a marriage arrangement.

Daddy Cha thinks that Psycho-jo doesn't really love Se-kyung. Rather he just wants to annoy him. Once daddy acknowledges her, she will be dropped. Psycho-jo is furious and tells her to wait outside. When she doesn't budge, he drags her outside and goes back in, leaving her to listen to them argue. In-hwa comes out of the room next door and congratulates her. Things like this happen in "her world" all the time. Then, nose in the air, she leaves Se-kyung to listen to the people in both rooms fighting over the situation.

She kneels and realizes what entering Cheongdam-dong is for a person like her.

Psycho-jo accuses his father of pushing up the marriage after finding out Coach Tick was GN Fashion's daughter-in-law. He wants to make Psycho-jo yield. Daddy Cha agrees - that's his wish in life. Psycho-jo hasn't followed daddy's wishes at all, but because of that, he says, he has been able to breathe. They declare that nothing good will ever come between them.

I want them to make-up. WAH!

In the room next door, Min-hyuk is still laying into a humiliated Tommy Hong. He was suspicious ever since Tommy wagered everything in his life for the "business deal". (I think he meals the Olympic sponsorship.) Min-hyuk tells him he's not a designer, but a matchmaker, who puts his life on the line with every match. This is why people say not to trust people with murky backgrounds.

Min-hyuk tells Se-kyung she can quit her job now as Psycho-jo's fiancee and Mama Shin is just disgusted by Se-kyung's low status. Tommy is about to tell her exactly what he thinks when Psycho-jo walks out. He tells Tommy to back off and drags Se-kyung off.

Tommy goes back to his office and fumes. The investigator comes with information about Se-kyung meeting with Coach Tick. He video recorded the meeting and when Tommy sees who it is, he's shocked.

Psycho-jo has taken Se-kyung to a hotel and explains that when he was ten, his mom divorced his dad and left. It was then that he began to feel stifled by his father. One day his mom took him from school, spent a few days with him and returned him home, never to see him again. She did it for the alimony, so she could quote her price. His father then said, "If someone loves you, don't believe it. That means she will only use you". He can't hear "I love you" because his heart clenches and he wonders if it's real.

Se-kyung begins to cry as he explains that he constantly doubts and feels anxious. But then one day someone said that the opposite of "I love you" is "there is nothing else I can do for you". Psycho-jo approaches her with a ring saying there is love that isn't scary in this world and she showed him that. He asks her to marry him and I can only imagine how guilty she is feeling.

"[Spoiler] Cheongdam-dong Alice: Episode 11 Recap"
by HanCinema is licensed under a Creative Commons Attribution-Share Alike 3.0 Unported License.
Based on a work from this source