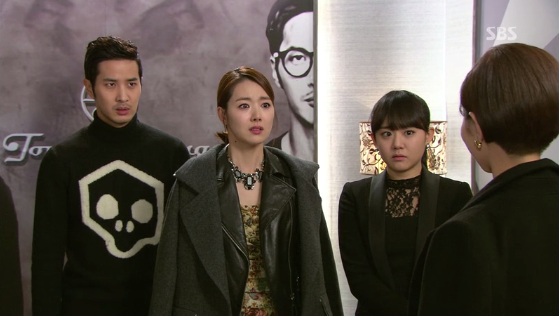 So we finally get some real confrontation...sort of. In any case, this episode was better than the last. There was some fun family times, which are my favorite part of the show...besides Park Shi-hoo's smile. *drool*

A very nervous Tommy Hong has interrupted wedding dress shopping to try and intercept the video message In-hwa sent before Psycho-jo sees it. Tommy says he was there for business and came to congratulate Psycho-jo on his wedding. Psycho-jo is, of course, annoyed by his persistence. Se-kyung takes a hint and distracts Psycho-jo by telling him not to get mad so Tommy can snatch the phone.

Tommy leaves Se-kyung rattled and quickly deletes the video message. He interrupts a happy Psycho-jo enjoying his bride-to-be's beauty to return the phone, giving the excuse that he wants to sponsor the wedding. Se-kyung distracts Tommy again and Tommy sets the phone down and quickly leaves.

Coach Tick confers with Tommy and lies to a concerned Min-hyuk that everything is fine before leaving to meet Tommy. In-hwa overhears and realizes that Coach Tick took care of the video.

Se-kyung also heads to meet Tommy, lying to Psycho-jo that she is heading to the office to do a bit more work. He smiles happily after her, blissfully ignorant.

Is it just me, or is everyone annoyed with Psycho-jo's image of Se-kyung? It's like he's put her on this pedestal so every time she does something bad, I feel worse for him because he's such an adorable idiot. His perfect little bubble idea of her is going to burst.

Tommy and Coach Tick realize that In-hwa stole the video before Tommy deleted it. Coach Tick knows that In-hwa will try again. Se-kyung joins them and gets updated. Tommy wants to hack her e-mail, but Se-kyung advises against it. The video may be stored elsewhere. Besides, hacking is how one really gets caught.

Suddenly, In-hwa bursts in to Coach Tick's overacted horror. She tosses the tablet on the tablet and tells Coach Tick to delete the video like she deleted it from Min-hyuk's phone. Coach Tick falls to her knees, begging to be spared just this once. Tommy asks In-hwa to reconsider and takes the blame.

In-hwa glares down at them, full of arrogance and furious indignation. She knows she's the one with the power.

Coach Tick begs forgiveness again and In-hwa sneers that it's the only thing Coach Tick can do, leech like a parasite. It's how people like "them" survive. She won't lose everything, she's just going back to the beginning. Coach Tick isn't one of "them" because she lived with "them". In-hwa tells her never to ask for forgiveness. She also says that she's not taking revenge for ruining her marriage prospect or insulting her family. She's just bringing judgment down on two gold diggers that don't know their place. She promises to show them justice.

Oh I see. You want to be god. Well, I bet you sit on the crapper just like everyone else.

Se-kyung stops her with a question. "What justice?" If she's a gold digger, then what is In-hwa? Didn't she want Psycho-jo for what he had? How are they different?

At this point, Coach Tick tells her to stop, but In-hwa wants to hear Se-kyung out. Se-kyung tells her to show some dignity to show justice; she sent the video anonymously so that it won't be known that it was she who took her oppa's wife away. In-hwa didn't want responsibility and that is not what justice means.

"[Spoiler] Cheongdam-dong Alice: Episode 13 Recap"
by HanCinema is licensed under a Creative Commons Attribution-Share Alike 3.0 Unported License.
Based on a work from this source