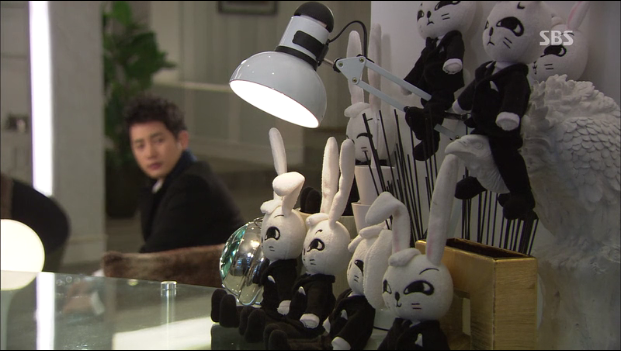 Enter detective Psycho-jo, who has stooped to new lows of immaturity as illusion and reality collide.

Psycho-jo has just been confronted by Se-kyung who told him she wants to show him everything just as he showed her everything. But, he says he's already seen everything. She drops the nice girl attitude and asks, "Se-kyung who is like Candy? Yes, that is me and the person who used you is also me". She doesn't differentiate between the two. And neither does he and it's driving him crazy.

Wait, Psycho-jo, my love, my dear. You are ALREADY crazy. Just sayin'.

He tells her that he just woke up from a six year nightmare. Why does he have to have the same dream again? It drives him crazy that it isn't a dream, but reality. He tries to leave, but she stops him by saying she's not Seo Yoon-joo.

(I really want to use her name now. She's not really a tick anymore, is she?)

Se-kyung won't run away like Yoon-joo and Psycho-jo can't run away either. Tommy watches as she tries to drag him out of the airport. Psycho-jo shakes off Se-kyung's arm and declares he won't change his mind. She tells him that someone said he would die and that everyone is worried about him. He is annoyed and asks who said it. Answer: Yoon-joo, Dong-wook and his father. He is especially shocked by hearing his father was worried. What did he do wrong that would make him die? he asks. She thinks Psycho-jo isn't the kind of person who would die over something like this and he agrees.

Then she throws in the kicker: why does everything think that he will?

He says they're overreacting and she replies that this is the response that Psycho-jo wanted, for attention, like a child. His mental problems are fake as well. He doesn't like to hear that at ALL. He is no child, he declares. Se-kyung also agrees with that and demands to know why he's running away like he does during important situations, to escape reality.

He defends himself by saying he doesn't want to see her or even be in the same country as her. She isn't phased and merely tells him to keep his promise: that he will only die if she leaves him. Then, quite petulantly, he yells, "I won't die!"

And Dong-wook and Secretary Moon run over to them, faces full of worry. They ask if he's okay, and he says they're overreacting. He's just fine. Dong-wook tells him what Se-kyung did: everyone was worried about him. Psycho-jo tells them to stop worrying and Se-kyung, quick on the uptake as always, tells him not to run away if he hates everyone's overreactions.

Psycho-jo fights Dong-wook's attempts to drag him out, but ends up getting in the car in the end. Se-kyung watches him go with sadness and relief.

In the car, Dong-wook asks how long Psycho-jo knew about Se-kyung. He just found out from Daddy Cha today and then Secretary Moon heard from Dong-wook. Psycho-jo twists the truth: everyone knew but me?

Seriously dude, come ON! We know that you were hurt, but what's with all the drama? Se-kyung is right - you're acting like a child.

Anywho, Psycho-jo wonders what they all said to make Se-kyung so worried. Dong-wook tells him that Se-kyung came to him to ask a few questions. Dong-wook promises to talk to her, but Psycho-jo warns him not to say anything, or talk about him...EVER.

Tommy drives Se-kyung home. In the car she tells him that she will go to Psycho-jo first thing tomorrow because he will have a lot to ask her. She has to answer everything no matter what. Tommy says that Psycho-jo may not ask because hearing the truth may be painful. She will go everyday, anyway. Tommy wonders why he wants her to stop now. he tells her he liked someone a long time ago, someone he liked a lot. But they broke up because he saw too much of the good and the bad in her.

Se-kyung gets what he's saying because she's broken up because of the same reasons. But she is not the kind of person to let it end so easily.

"[Spoiler] Cheongdam-dong Alice: Episode 15"
by HanCinema is licensed under a Creative Commons Attribution-Share Alike 3.0 Unported License.
Based on a work from this source