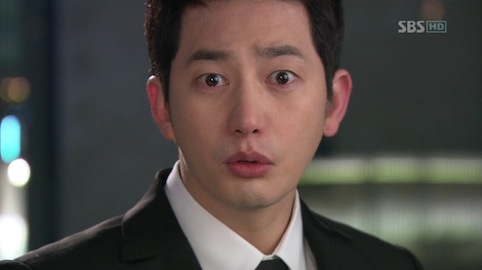 Why wasn't this show this strong from the beginning? Laugh-out-loud humor, solid character development and killer music directing.

Because Yoon-joo the Tick is oh-so-inspiring, Se-kyung has found hope that she, too, can become successful like the Tick. That is, if the Tick helps her because the Tick is the ONLY person she has met who has overcome her birth circumstances and moved up in the world. If she can do it, so can Se-kyung.

Don't get near her, Se-kyung! She'll suck your blood!

Psycho-jo replays the conversation he had with the Tick again; he's not as happy with it as he initially was.

This is because you're not really psycho, are you Psycho-jo? The behavior masks depression and pain. Compensating doesn't fix. You need to deal with your issues. Revenge just piles more issues on the fire. But I guess you and the Tick will learn that the hard way.

Dong-wook shows up and Psycho-jo gives a blow by blow of his first meeting with the Tick and her people. It's hysterical. His heart pounded as the elevator rose and then he saw her horrified, pale face through the doors. There's nothing like revenge!

However, Dong-wook is no fool and sees that Psycho-jo's revenge is just a front. He hasn't cried and Dong-wook urges his friend to do so. In this situation, meeting a woman who hurt him so badly, he should feel sad and empty, especially after enacting his revenge - because it's pointless and nothing good comes after it.

Psycho-jo thinks he should be exhilarated by the revenge, but Dong-wook knows better. He urges him to cry and deal with the anger inside. Dong-wook sees that Psycho-jo is scared the tears won't come. (I'm guessing he hasn't been able to cry at all since the incident.) Psycho-jo is in denial, however, and doesn't take the advice kindly. He unceremoniously kicks out Dong-wook.

Se-kyung leaves the Tick's place and is spotted by the Tick's brother Seo Ho-min (Gu Won). He seems to be close to his sister. He also seems to be a mooch as he's come to ask her for money. He asks if she met "Han Se" (the school  nickname that Se-kyung hates) and thinks the Tick should just help her out. But the Tick doesn't want Se-kyung in the neighborhood.

And then Ho-min suggests: aren't Cha Seung-jo and Han Se-kyung on the same team? They both appeared at the same time and are bugging the Tick.

Ah-jung calls Se-kyung to give her the news that In-chan is being sued by Artemis for illegal distribution. She also mentions the hospital.

The next part kinda really pissed me off. Okay, not just kinda, SUPER.

Dong-wook turns out to be a psychiatric psychologist who is treating his FRIEND.

Okay, before I get into the scene, let me rant. It is so supremely unethical and psychologically dangerous to treat a friend. You can't be an unbiased observer. It's just impossible. Humans are easily swayed, fallible and driven by emotion. There is a reason shrinks aren't to have personal relations with patients. And on top of that, Dong-wook is the one who prescribes Psycho-jo's meds.

Now on with the recap.

Dong-wook asks for Psycho-jo's records, the one's from Paris as Psycho-jo explains his theory on his psychological state: Anger is caused by an obstruction of one's desires. Or, one can have been subjected to coercion. His desire was not obstructed and neither was his coerced. He hasn't felt any anger as Dong-wook had suggested he did. Well, there was one coercion: Dong-wook forcing him to cry.

The unethical shrink urges him again to cry and Psycho-jo grabs his meds and storms out.

He heads to the car and puts on Handel's "Lascia ch'io pianga" from his Almira opera. (Thanks Cherkell for identifying it.) Then he bows his head and begins a high, keening wail that is so hysterically and obviously fake. Moments later he stops and checks his eyes to see if tears came out.

It's not surprising that he can't cry after being emotionally brutalized by his father and his ex-"wife".

A couple storms in front of his car and fights. It's In-chan and Se-kyung, but Psycho-jo doesn't see her face until after he hears In-chan order her to leave. Se-kyung starts to walk away and Psycho-jo approaches her. She wonders if he, "Secretary Kim", is here about the lawsuit.

I seriously wonder when that identity trickery is going to be unveiled.

Anyway, she asks him to be kind because In-chan just lost his family. Psycho-jo sees In-chan in the funeral hall and calls Secretary Moon to have a floral arrangement. Hilariously, Secretary Moon asks if it's to be a congratulatory wreath. Uh, you don't exactly send one to a funeral hall.

When Psycho-jo turns he sees Se-kyung hovering outside of the funeral hall and hides to watch her. I think he's affected by the raw sadness emanating from her. That, and the writer's needed an excuse to have a private detective photograph them together.

The photographs get sent to the Tick by her brother. She orders him to find out what Se-kyung and Psycho-jo's relationship is.

Ah-jung scolds Han Se-kyung for worrying about In-chan being sued by Artemis on order of the president. Se-kyung assures her friend she's going to end it for good with In-chan.

Yeah, seriously. A cameo is supposed to be a cameo, not three episodes long. That, and he's sooooo damned weepy. I can't handle all of the crying. More on that in my comments.

Secretary Moon shows up with the legal team and Se-kyung asks him to deliver a letter to the chairman. In-chan just lost his mother and Moon agrees that legal action shouldn't be taken in such a sad situation. He will deliver the letter.

Then the most awesomely synthesized music accompanies Psycho-jo failing to do a tree pose in yoga. It sounds like Final Fantasy V music, right?!

Anyway, he's trying not to fall on his sexay behind. His instructor says he has a lot of negative energy caused by his thoughts.

Then daddio shows up and Psycho-jo falls out of his pose. Daddio got into Psycho-jo's private class by claiming relation. In the locker room, we get a peek at my favorite abs and then a tense father/son scene. Dad is nice and relaxed until Psycho-jo accuses him of stalking. Then dad makes fun of Psycho-jo's inability to do yoga.

Dad  notices that he's being followed.

"[Spoiler] Cheongdam-dong Alice: Episode 3 Recap"
by HanCinema is licensed under a Creative Commons Attribution-Share Alike 3.0 Unported License.
Based on a work from this source