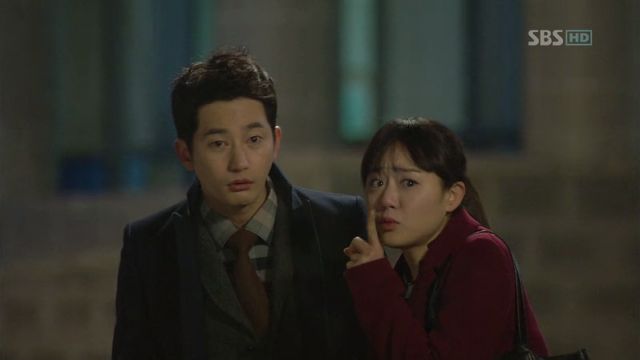 This show keeps getting better. Se-kyung's emotional palette widened, she opened up more to "Secretary Kim", there was some serious hilarity and we got to see how sweet Psycho-jo really is. I'm really falling in love with the show because I love how quirky and off-kilter Park Si-hoo's character is and I love that our female lead is severely, severely flawed. While I'm waiting for In-hwa to beef up a little more as a character, Coach Tick (Yoon-joo) is an awesomely layered baddie.

(The paper clips in his pocket make rabbit ears! I forgot to mention it last episode.)

Psycho-jo leaves a confused, soy sauce drenched Tommy Hong and searches for Se-kyung, but he can't find her. And Tommy Hong tries to do damage control at his party. Skeezy Chairman Jang wonders if Tommy has lost his touch, which, of course, sends Tommy to his office to pout. His secretary scolds him for misjudging Se-kyung because Se-kyung's appearance and style didn't give off the "I'm looking for a sponsor" vibe. And he's usually such a good judge of character.

Se-kyung returns to Tommy Hong's place, knowing that she lost the best White Rabbit and that she has to make amends. He's scoffs when he sees her and is shocked to hear her ask for his apology.

That's right, girl! You ask for that apology!

She tells him that he could've rejected her as a recommended designer and had that be the end of it. But she was treated so badly she feels like she deserves a formal apology.

Tommy tells her that he noticed all of her movements: waiting at the entrance, knowing everyone's profiles and was most conscious of him the entire time. If she was being sponsored by Artemis' president, she wouldn't need to look good in front of him, so why was she doing that? Se-kyung can see he doesn't feel apologetic and turns to leave, but he stops her. He finally understands and apologizes for misunderstanding: what she really wants is to enter Cheongdam-dong. But she's been discovered by him. He smirks and she asks what he sees in her eyes.

Se-kyung leaves and Tommy says to himself that he didn't misjudge her. She reminds him of someone.

On her trudge home, her heel breaks and she walks home on one heel and one tiptoe, freezing. When she sits, Psycho-jo sees her. He approaches her and mumbles that she should stop turning off her phone. Kekeke. Was he looking for her? she wonders. In turn he tells her that his president is nuts to make him keep "doing these things". He takes her inside, gives her some fancy footwear to replace her busted heels. He starts going through the president's clothing, shirts, jackets, shoes, accessories and also gives measurements and favorite fabrics and colors. She is very confused by the sudden inundation of information, until he continues the monologue with the president's name. The person she is to style.

This ruse is getting more amusing by the second. I smell hijinx coming.

Secretary Psycho-jo tells her she'll have to run around, but as a stylist, and learn to have a discerning eye. Se-kyung is hesitant because she doesn't want to stain the president's rep. Psycho-jo wonders why she's turning down the once-in-a-lifetime help. Is there something wrong with her? Why does she think something like this can't happen to her?

Then Se-kyung remembers she needs a new White Rabbit. Hrm...

"[Spoiler] Cheongdam-dong Alice: Episode 5 Recap"
by HanCinema is licensed under a Creative Commons Attribution-Share Alike 3.0 Unported License.
Based on a work from this source