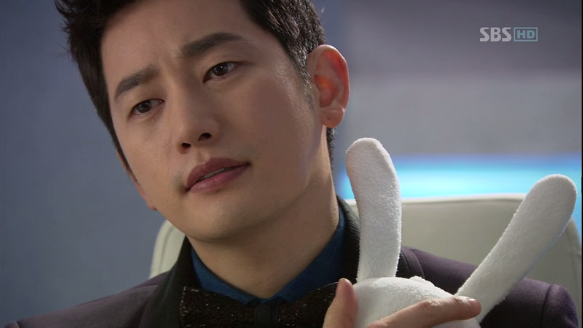 This episode was the bridge that Se-kyung crossed to the dark side.

So here I am, all thinking that they're going to see each other, but Se-kyung freaks out and hides against the elevator wall so that Psycho-jo sees no one when the door opens. Actually, I'm not sure he'd see anyone as he is in such a daze over the news that Secretary Kim delivered: Se-kyung likes Secretary Kim.

He walks slowly out of the elevator, stopping Secretary Moon every few to ask: "Really?" It's so adorable how Moon gets more annoyed at each repetition. But Park Shi-hoo is even cuter.

The happier Psycho-jo gets, the more depressed Se-kyung gets. It takes her a while to get off of the elevator. She remembers all of the strange encounters she's had with "Secretary Kim" and the truth hits even harder.

Yeah, I can see this turning her back to normal or making her really evil. I think she'll go the evil route.

In the green room, Psycho-jo is so happy he (as always) can't figure out what to do. He picks up Dong-wook in a bear hug because he's so happy. He excitedly wonders how long she's like him and starts doing his crazy head dance. SO. CUTE.

Dong-wook advises that Psycho-jo tell Se-kyung the whole truth and confess his feelings for her. But Psycho-jo freaks out because Se-kyung likes Secretary Kim and not the president.

Okay, every innocent statement he utters makes me cringe for the pain he will endure later.

In any case, Dong-wook comforts Psycho-jo by saying that he is neither Jean Thierry Cha nor Secretary Kim. He is just Cha Seung-jo, a man who likes a woman.

Se-kyung nervously finds her seat and struggles to digest the information she's just learned. She even hallucinates his handsome face in her water glass and frowns even more. I wonder if she is every going to smile ever again.

Psycho-jo and Dong-wook search for Se-kyung from backstage and Psycho-jo tries not to hyperventilate from nerves and insecurity. He's terrified to tell her the truth and runs away like a total goof, looking rather like the nutty characters in Zelda games. Tommy Hong watches him run and gets more curious about the Se-kyung/Psycho-jo mystery.

Daddy Cha is meeting with Coach Tick and doesn't seem to pleased to discover that she is the daughter-in-law of GN Fashion. She falls to her knees and begs him to keep her secret (that she used his letter to marry into Cheongdam-dong). He agrees to keep her secret as long as she helps the marriage between Royal Group and GN Fashion go off without a hitch. Coach Tick doesn't want this at all, but Daddy Cha sneers at her. The only thing he ever liked about her was her business sense; let this remain business, just like her relationship with Psycho-jo was supposed to be.

I feel so badly for her. Everyone thinks she's this cold-hearted business-oriented wench, but she just wanted to secure a comfortable life, even at the expense of happiness and love.

Daddy Cha realizes that his son must know about Coach Tick's relation to GN Fashion. In a touching turn, Daddy Cha feels pity for his son's plight.

In-hwa and Min-hyuk arrive and greet Tommy Hong. Then they notice Se-kyung. In-hwa approaches her suspiciously, but before Se-kyung can explain, the art talk begins.

Backstage, Psycho-jo freaks out over what he has to do. Secretary Moon snaps that he shouldn't have been more careful. When Psycho-jo stares at him incredulously, Moon clarifies (with his finger in the air) that people should be truthful with the person they love. Dong-wook agrees (also with his finger in the air). Psycho-jo grins as comprehension dawns on him and his wagging finger joins the others. He's going to be honest and tell her the truth!

"[Spoiler] Cheongdam-dong Alice: Episode 8 Recap"
by HanCinema is licensed under a Creative Commons Attribution-Share Alike 3.0 Unported License.
Based on a work from this source